Horton Hears A Who! Blu-ray Review

Theodor Seuss Geisel, better known to the world as the beloved Dr. Seuss, was born in 1904 on Howard Street in Springfield, Massachusetts. Ted’s father, Theodor Robert, and grandfather were brewmasters in the city. His mother, Henrietta Seuss Geisel, often soothed her children to sleep by “chanting” rhymes remembered from her youth. Ted credited his mother with both his ability and desire to create the rhymes for which he became so well known.

Ted began to pursue a career as a cartoonist. The Saturday Evening Post and other publications published some of his early pieces, but the bulk of Ted’s activity during his early career was devoted to creating advertising campaigns for Standard Oil, which he did for more than 15 years.

Eventually Viking Press offered him a contract to illustrate a collection of children’s sayings called Boners. Although the book was not a commercial success, the illustrations received great reviews, providing Ted with his first “big break” into children’s literature. Getting the first book that he both wrote and illustrated, And to Think That I Saw It on Mulberry Street from there on over the years he spawned such classics as The Cat In The Hat, Green Eggs and Ham, Oh, the Places You’ll Go, Fox in Socks, Horton Hears A Who! and How the Grinch Stole Christmas.. At the time of his death Dr. Seuss had written and published 44 childrens books.

Many years later, here we are now with film adaptations from the legendary Dr. Seuss. This version of Dr. Seuss’ Horton Hears A Who! is that of an adaptation of Chuck Jones’ from 1970. If your fan of Horton Hears A Who! or Dr. Seuss classics in general then you will probably find some nostalgic enjoyment out of this one. However, my daughter fell asleep in this one, and mind you it was only 26 minutes! The following day she was not too happy when I asked if she would like to watch it again with me. Of course kids these days are glued to the Disney channel and attach to more high-tech animated movies like the last rendition of Horton Hears A Who! starring Jimy Carrey as a voice actor. None the less, she still loves old classics like Cinderella, Snow White, and The Jungle Book so this shouldn’t have been too different in that realm. It just didn’t have the IT factor in my humble opinion.

The video quality for Horton wasn’t necessarily bad for an old classic getting the blu treatment, but it wasn’t jaw-dropping by any means either. It does have tons of vibrant eye popping colors that help beef it up in this department. The screen shots though however may actually look a little better than that of the actual color representation. I think it has more to do with trying to make best with what the original allowed them to do. Albeit it looks good and sharp but it shows its age and doesnt look as immaculate as that of perhaps Snow White. 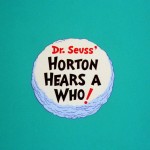 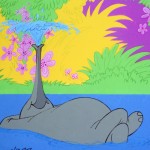 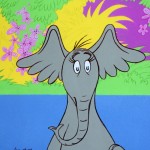 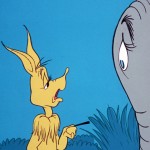 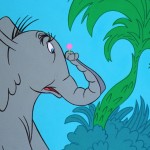 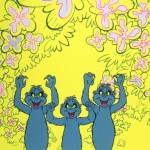 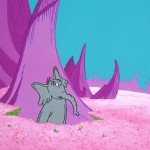 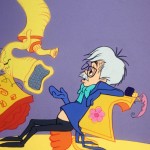 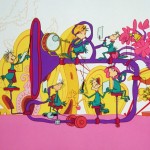 Make no mistake about it, prehistoric audio quality here folks! It really didn’t matter what audio codec they used with this one as it’s basically a book transferred to film. I was surprised they even utilized the rear speakers. It fits the nature of the film though to a tee. It’s an old-school cartoon with old school audio that just barely gets the job done. Sadly, there isn’t too much to elaborate on in the audio department on this film. There were times when dialouge was distorted and even instances of horrible volumes where you had to grab the remote and turn it down or up based upon the fact. Audiophiles would quench. It would have been a laughing matter if this would have been in any codec but Dolby Digital as I don’t believe the original track gave them much to work with in the sense of distortion. However, overall the audio track was downright unbearable as many times I found myself scrambling for the remote to turn it either up or down. That could’ve easily been adjusted up or down with amplifying and deamplifying techniques if remixed correctly. More than likely that is the fault, it probably wasn’t remixed.

In Search of Dr. Seuss (SD, 90 minutes): A feature hosted by Kathy Najimy explores the life of Dr. Seuss with guest appearances from stars such as Robin Williams. I guess this is what your paying for clocking in at an hour and a half.

You Can Hear Horton, Horton Can Hear You! (SD, 3 minutes): A sing-along of several Horton songs.

Digital Copy: Digital Copy Disc and DVD is housed within the Blu-ray amaray.

The narrator was a bore, the audio was poor, the video was a snore, oh how this movie needed more. The bottom line is that at a runtime of only 26 minutes you can find a lot more better choices like Horton Hears A Who! starring Jimy Carrey or even How The Grinch Stole Christmas also starring Jimy Carrey at the same price as of now. However, if your a Dr. Seuss fan all over perhaps keeping a close eye to this title for a price drop would merit the purchase since it had some interesting extras. In fact, that seems to be the bread and butter on this release for any real Dr. Seuss fans is that of the supplemental package.

4 thoughts on “Horton Hears A Who! Blu-ray Review”