Overall, it feels like a story about how the 70s turned into the 80s and how hard it was for this group of people to adjust once everything the 70s meant for them just up and vanished. The good life has a downward slope. But on the way to the 80’s there are so many wonderful scenes with such wonderful dialogue and humor.

Boogie Nights is supported by an amazing cast (so many actors in Boogie Nights have become stars in their own right that I doubt any producer could afford to assemble this group again). A memorable moment for me is when the two are talking about how much the squat and bench by the margarita mixer. Burt Reynolds is remarkable. Julianne Moore is wonderful. Reily and Whalberg are hilarious throughout. The time period is re-created with exceptional care; fashions, decor and detail from the era are plentiful. This is such great storytelling! There are many individual storylines, but they all compliment each other beautifully.

This film truly is a treat for film go’ers alike and those not taken back by porn environment and drug use of the 70’s/80’s. A really refreshing movie with director Paul Thomas Anderson’s only 2nd film to date at the time. Even when nothing major is even going on it seems to have that gravitational pull to just capture you for the moment as you just sit there watching it as the story unfolds. Great directorial techniques as well and from a guy who didn’t go to film school no less! Enter Boogie Nights, the story of the rise and fall of Eddie Adams … aka, Dirk Diggler!

Boogie Nights arrives on Blu-ray with a 1080p VC-1 encode framed at 2.40:1. If you have seen previous version of Boogie Nights then you probably already know what’s coming. It comes with the 1970s colors and look. However, in no way does this set the film back as everything is vivid, the colors are vibrant, black colors are deeper. There are plenty of scenes which showcase just how beautiful this transfer is. The fine detail is exceptional throughout the film, it is very apparent in the faces of the actors and a look at the costumes will reveal things you probably never see in the previous DVD version. 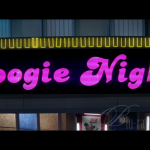 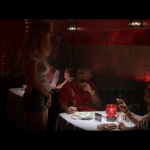 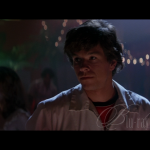 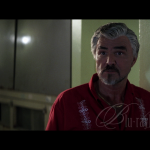 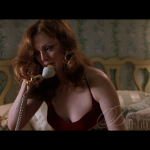 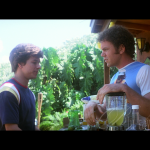 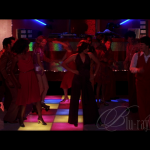 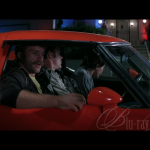 Boogie Nights arrives on Blu-ray with a 5.1 Dolby TrueHD lossless audio track. This is best sounding version to date. The dialogue is clean and crisp, always cleanly reproduced except in the beginning club scene where it’s very difficult to understand. There is always a song in the background and the rears are always reproducing each music tone exceptionally. Occasionally, the rears are also used for some ambience sounds as well as some special effects. This is a really impressive audio track, there is some hissing noises at some point in the film, but they are minor. The audio track handles everything the director throws at it.

Boogie Nights comes with a cool set of extras and while they are not in high definition, anyone can appreciate the effort. There seems to be some great commentary tracks so let’s get to it and see what’s inside.

Audio Commentary – Featuring Director Paul Thomas Anderson talking about how to rip-off movies. He goes deeper into his influences and ideas. Very informative piece and definitely worth a listen.

Audio Commentary – Featuring P.T. Anderson, Mark Wahlberg, John C. Reillly, Don Cheadle, Julianne Moore, William H. Macy, and Heather Graham. This isn’t a big get together commentary, it’s mostly with a pair of actors and/or solo, it seems that Anderson recorded the Q&A and patched it together. That’s not to say that this is a bad audio commentary on contraire it’s rather entertaining.

The John C. Reilly – These are outtakes and longer cuts of already existing scenes. There are a total of three scenes: “Swim Trunks”, “Mixing with Nick” & “Waiting for Todd”.

Deleted Scenes – There are 10 total scenes included in this section.

The conclusion to the much anticpated North American non-exclusive release to blu-ray is that of much appraisal. Earlier released exclusive to Best Buy only in the USA the Blu-ray has finally been released nation wide regardless of retailer. First and foremost, the film is extraoridinary and absolutely refreshing even to this very day. That being said, my opinion on the film itself is positive and one that I believe any adult should see. This is by far one of the best films from the late 90’s. Hell, all the 90’s for that matter. The Blu-ray release exceeds expectations and thank god was transferred beautifully. The multi-colored hip era of the 70’s and 80’s shines through gorgeously on a great transfer. The lossless track amazes and will make audiophiles rise to the occasion if you know what I mean. *wink wink* The supplemental packge is decent and thus this film comes highly recommended! Do yourself a favor and add this one to your collection or rent it at the very least, you won’t be disappointed.