The Princess and The Frog Blu-ray Review

“The Princess and the Frog” is Disney’s welcome return to the traditional hand-drawn-style animation. What is more important is that the film is helmed by Ron Clements and John Musker, a director team responsible for two great Disney animations – “Little Mermaid” and “Aladdin” – and, well, less impressive “Treasure Planet.” “The Princess and the Frog” marks the “comeback” of the creator pair since the ill-fated sci-fi action adventure, and their latest work, though not perfect, is entertaining enough to remind us of the glorious days of Disney animation.

Tiana (voice by Anika Noni Rose, “Dreamgirls”) is a hard-working girl dreaming of one day owning a restaurant in New Orleans. One night she encounters a talking frog begging for just one kiss. This is actually Prince Naveen (Bruno Campos), a spoiled prince magically turned into a frog by voodoo master Dr. Facilier (Keith David). She does, reluctantly though, like in a fairy tale she once read – which is only the beginning of adventures and a romance for Tiana and the prince.

Though “The Princess and the Frog” is an enjoyable tale with colorful designs and talented cast, it doesn’t quite reach the height of classic “Little Mermaid” as the film lacks two major characteristics: a compelling story and memorable music. The story starts out interesting with a few unexpected turn of events, but it sags a bit in the middle part. The musical part (songs penned by Randy Newman) is good, but not as great as Alan Menken/Howard Ashman’s original songs like joyful “Under the Sea.”

What you have instead is Jazz-age New Orleans and everything associated with the city turned into animation – the swamp, the French Quarter, Mardi Gras and Tiana’s Cajun cookbook. The goofy trumpet-playing croc steals every scene from the two leads. Maybe not as great as “The Lion King,” but “The Princess and the Frog” is a pleasant fantasy tale.

It’s pretty hard to put into words the reaction I got when watching The Princess and the Frog. I mean, the picture quality is just absolutely stunning. We all know that the CGI Pixar flicks look incredible on blu-ray, but it was very cool to look at how great hand drawn animations can look on blu-ray as well. Sure this wasn’t the first hand drawn Disney flick to get the blu-ray treatment but it seems to be that of the most modern Disney flick to come to light on blu-ray. Musker and Clements did a hell of a job and I can’t wait to see their other classics transform onto blu-ray as well. The Little Mermaid, Aladdin, Hercules and The Great Mouse Detective are going to rock people’s socks off just as much as Princess and the Frog did mine! The video quality was nothing short of amazing as the color representation is perfect and pops out at you when needed and warm when need be. Everyone will be extremely pleased and videoholics can rejoice. 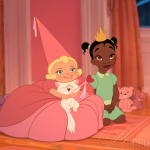 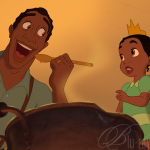 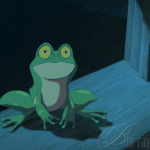 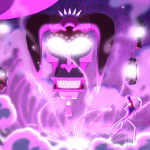 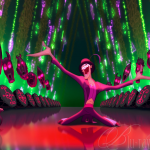 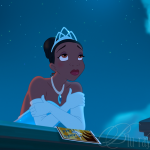 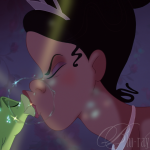 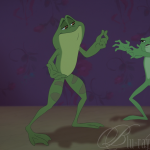 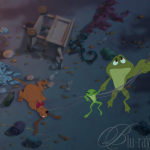 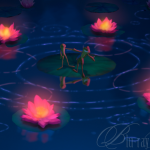 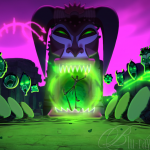 The Princess and The Frog comes you way with a wonderful DTS HD Master 5.1 audio track. As suspected, Disney hits this one out of the park. The musical scores really helps this track stand out and as we have come to expect with Disney the dialogue clarity is clear, tight, and precise. Nothing bad to comment on in the audio department as your speakers will get a nice hefty load what with the occasional sing-along song numbers spread throughout this future Disney classic. Sound effects come across nicely when utilized in the rear speakers but the track is mostly front heavy. The sub gets some work in as well and does so justly and accordingly.

Again, part of my supplemental score derives from the fact that this release included not only the blu-ray disc but the dvd disc and digital copy. Aside from all that, Princess and the Frog included a plush amount of supplements and worthy of Disney’s claim for their 9th princess!

Audio Commentary: Directors/co-writers John Musker and Ron Clements along with the producer give a very insightful commentary track that can please adults who are interested.

Magic in the Bayou (HD, 22 minutes) Next to the amusing commentary this is a great supplemental piece.
The Return to Hand Drawn Animation (HD, 3 minutes) The return for disney but not for Clements and Musker. Cool piece.

The Disney Legacy (HD, 3 minutes) Another interesting piece that fans will enjoy.

A Return to the Animated Musical (HD, 3 minutes) Self explanitory, touching base on just that.

Conjuring the Villain (HD, 2 minutes) Self Explanitory, another good piece.

What Do You See: Princess Portraits (HD)

The Princess and the Animator (HD, 2 minutes)

Once again, time for the bottom line! As you can see from the ratings alone, this is another Disney masterpiece and soon to be a Disney classic after x number of years! Exceptionally well played out with the New Orleans, Louisiana theme coupled with incredible hand drawn animations have made this one to remember. The video quality is that of sheer excellence and the audio quality brings its best. The supplemental package including all in the 3 disc is that of satisfaction and the movie overall is a joy of entertainment for kids and adults alike. BRC highly recommends The Princess and The Frog on blu-ray disc.

3 thoughts on “The Princess and The Frog Blu-ray Review”