“Das Boot” is to the German side of WWII what “Saving Private Ryan” is to the American side today: a gritty, realistic, excruciating look at life in wartime, in this case in a submarine (U-Boat). Jürgen Prochnow plays the captain who, along with his crew, is simply trying to survive the tour of duty and attacks from Allied forces in the terrifying deep.

The submarine arm of the Kriegsmarine suffered 75% fatalities during WW II. By the end of the war, the average age of a U-Boat captain was about 20, and crews were often pre-pubescent children — too young to even grow beards. Brave, inexperienced children in outmoded boats, with heads filled with Nazi Reich propaganda, who faced battle-hardened Allied commanders more than twice their age. They were little more than depth-charge fodder. As a journalist for that propaganda ministry, Buchenheim came to know the real truth and the real horror of submarine warfare.

U-Boat crews have been maligned in history. Buchenheim reminds us that, like submariners of all nations, they were exceptionally brave young men who often went to sea knowing they had little or no chance of survival. Das Boot is an extraordinary film for submarine film lovers. It’s definitely worth a watch, if not a purchase. Often we tell people you shouldn’t judge the screen shots as a true representation of blu-ray quality. However with this release you can get a great idea as to what Das Boot looks like on Blu-ray. You see some shots that look marvelous, and then others that are very dark and hard to make out. That’s because you dealing with a submarine movie here, so expect dark scenes when inside a sub. The quality on this release is really outstanding for its age, and even more so considering the dark gritty scenes and what they were able to end up with. Sure there is grain in many of the dark scenes, but it should be damn near expected. Das Boot will have any fan of the film pleased and at the same time suffice for any new viewers who love submarine movies. And who doesn’t right? Gimme a rainy day with Das Boot, U571 and The Hunt for the Red October any day! 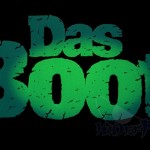 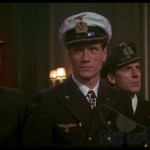 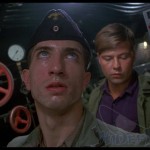 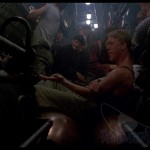 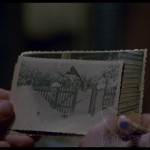 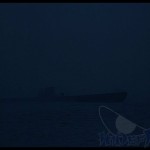 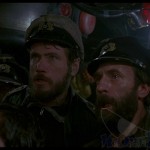 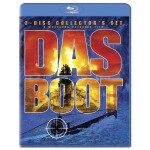 Das Boot isn’t exactly a movie that is set out to excel in the audio department. However, like any submarine movies you have so many sounds going on that when done right can help set the tone. Das Boot does exactly that as the depth charges blow and you grip your seat with tension. The eery beeps are no different. It may be a little hard to digest the audio quality when you are reading subtitles and not listening to words from your native language. In any regard, the movie sounds fine and the sound effects are well done through out this epic submarine movie. I don’t see too many people having any major quams about this. Audio Commentary of Director’s Cut with director Wolfgang Petersen, actor Jürgen Prochnow, and producer Ortwin Freyermuth – In a sense your typical audio commentary with break downs of scenes. Though never a bore, as if you are watching this commentary to begin with then you are interested in the film making. Peterson gives you just that, and keeps a high sense of honesty throughout. The fact that this commentary was made 15+ years later from when the film debuted makes it all the more interesting to hear these men speak of times past.

Historic Material – If you like History, then you will love this hour long feature that talks about how important it was to be as authentic as possible a long with talking about the battles themselves and even interviews with combat veterans!

The Perfect Boat “The Director’s Cut” – An interesting look back at the helm piecing together the theatrical movie along with the 6 hour television showing to make one definitive director’s cut.

Captain’s Tour “Inside the Boat” – A pretty cool interactive piece that allows viewers to tour the sub. Das Boot comes to blu-ray with a great video & audio transfer. The edition comes with 2 versions of the film and quite a nice bit of extras. The blu-ray is an upgrade like no others compared to versions past. For those who are fans of this film, this should be a no-brainer. For those who have never seen this film then you really should take it upon yourself to give Das Boot a viewing. Blu-ray collectors, let it be known the USA edition does come with a slip cover and that Germany will be releasing a Das Boot steelbook special edition. Overall, this is a great edition to anyone’s home library of blu-rays and comes highly recommended by hidefninja.com