QMx has announced a new figure of Captain Picard from STAR TREK: TNG will be available on Sideshow Collectibles

Quantum Mechanix (QMx) is releasing a new figure of Captain Jean-Luc Picard from the STAR TREK: THE NEXT GENERATION. He is a 1/6 scale figure and he has been authentically painted as well as sculpted. He is in his classic uniform and comes with a lot of accessories like a phaser, phaser holster (which magnetically attaches to his pants), the Earl Grey Tea cup, and a PADD. He releases around May-July 2017 and costs $179.99 USD. They have captured the classic look of the character so make sure to get yours before they’re gone.

-Fully Articulated Body: More than 30 points of articulation allow the figure to be displayed in multiple dynamic poses
-Approximately 29 cm tall
-Realistic Portrait: Lovingly rendered by a top artist, this is a perfect likeness of Patrick Stewart as the good captain. Each head sculpt is specially hand-painted
-Starfleet Duty Uniform Tunic: Meticulously researched, this duty uniform tunic matches the pattern, fabric, and color of the original costume
-An authentically scaled TNG communicator badge is permanently affixed to the tunic
-Starfleet Duty Uniform Pants: This faithful replica of the pants worn by the Enterprise crew in Star Trek™: TNG features accurate styling to the original costumes. A magnetic fastener allows the phaser and tricorder holsters to attach to the pants
-Boots: Leather-like material cut in the original style of the footwear worn in Star Trek™: TNG
-Star Trek TNG Display Base: A custom display base featuring the TNG delta design will hold up the figure and allow more extreme poses

Equipment:
-Type II “cobrahead” hand phaser – designed to be less “gun-like” than previous phasers, this is the defensive weapon for Star Fleet away missions. The phaser can be worn in a black holster that magnetically attaches to Picard’s pants
-Tricorder: This standard tricorder can be opened or worn in a holster on the pants
-PADD (Personal Access Display Device): the data display device used on board the Enterprise E
-Teacup: A clear tea cup with Captain Picard’s Earl Grey tea 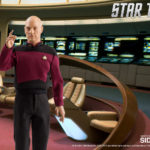 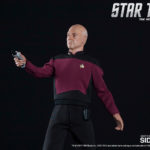 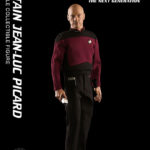 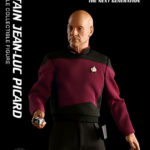 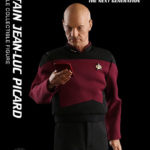 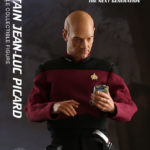 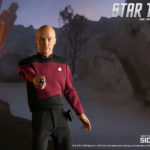 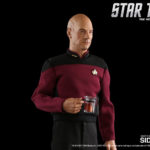 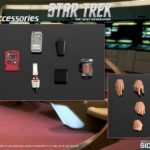 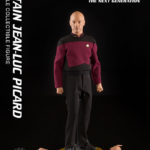 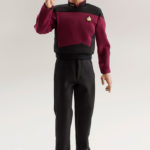 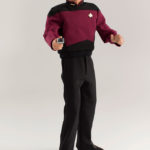 Expected to Ship
May 2017 – Jul 2017
Note: Item shown is a prototype. When shipped, the final production piece may differ in appearance.