The plot to Disney’s BAMBI is simple but well known.  In the forest, the animals live together in relative harmony.  The animals all pay respect to the new prince in the forest: a whitetail deer named Bambi.  He is taken by his mother to meet some of the families but makes friends with a rabbit named Thumper and a Skunk named Flower.
He is taught how the hierarchy of the woods works, where to go and where not to go.  There are not a whole lot of enemies except one, Man.  This is a lesson he had to learn the hard way.

BAMBI is a Disney classic even if you somehow haven’t seen it; you know a lot of what happens.  I even know that there are some folks out there who don’t deal well with “Disney Death” and it might stem from this film.  On that note, this really is a beautiful movie.  It has some of the best animation by hand with smoothness and beautifully drawn lines. I’ve said this before and I’ll say it again:  I think one of the things that the newer animation is sorely lacking is the beauty that you get from the combination of hand drawn characters against the painted backgrounds.  It is a lost technique that Disney stopped after 2011. The transfer is a 1080p AVC and it looks beautiful.  Several years ago when the film first came to Blu-ray, Disney remastered the film and the details are quite striking.  There are little spots where the coloring might be slightly off but overall, the coloring has been brought to an appropriate level.  The restoration has also brought out those painted backgrounds that I mentioned earlier. The sharpness in the line work can look almost digitally rendered but then there are some sections where the images are soft but these are where the film could only be restored to a point. 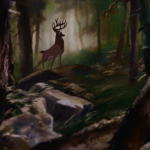 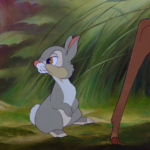 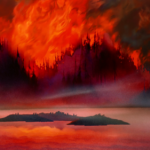 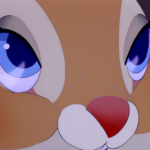 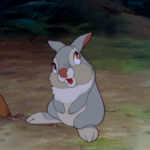 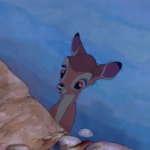 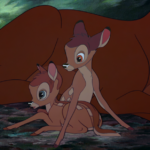 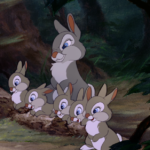 The audio is a DTS-HD High Resolution 7.1 mix that accompanies the film well.  It has taken the original mix and given it some depth with the scenes of music.  These songs make sure to use the entire surround field to separate some of the instruments in the orchestra.  The other times that the surround speakers are used well are during the scenes where there is some echoing in the woods.  It isn’t clear (or I missed it in the material) whether the mix was created from the 5.1 mix from the DVD or from the original audio mix on the film.  Either way, this is a mix that Disney should be proud to release with this classic. Supplements New To This Release:
-Studio Stories: Bambi: This shows some of the scenes being conceptualized through video and audio clips.

-Oswald the Lucky Rabbit: “Africa Before Dark”: This is a vintage short with one of Disney’s forgotten heroes named Oswald.

-The BAMBI Effect: This goes over how Disney’s animation changed after BAMBI.  Disney used female animators and even began an entire department for effects after this film.

-BAMBI Fawn Facts: This extra quickly throws out some trivia between the real animals and the ones from the movie.

Classic Supplements:
-The Making of BAMBI: A Prince is Born: This featurette, running close to an hour, explores the characters, story, and more.

-Tricks of the Trade: Walt Disney shows the use of a multi-plane camera and how it is used in animation.

-Inside the Disney Archives: Disney opens the vault with some of the artwork from the production.

-The Old Mill: This is the 1937 Academy Award-winning Silly Symphony short.

-The Golden Age: This featurette looks at BAMBI in the studios history and how it changed everything.

Digital-Only:
-Celebrating Tyrus Wong: This explores the life and artwork of Wong and how important he is to the Disney family. I don’t know if I can emphasize the point enough but this film is a classic. What I mean is that it is enjoyable for the family, it looks & sounds excellent in HD, and it is a part of cinematic history.  Yes, the part where Bambi’s mom is shot is incredibly sad but without that you don’t get the same experience about Bambi growing up.  This is an easy recommend to buy.