GHOST IN THE SHELL 4k UHD and Blu-ray Review GHOST IN THE SHELL 4k UHD and Blu-ray Review

The Major is one of the deadliest agents working for Section 9 and she is very different from anyone else in the world.  Her mind is human and her body is completely artificial.  While trying to figure out why terrorists are killing people who are a part of the Hanka Group, she begins to unravel a mystery of a man who can move through people with implants and upgrades without boundaries.

GHOST IN THE SHELL is directed by Rupert Sanders and he is best known for directing SNOW WHITE AND THE HUNTSMAN.  It is based on both the anime film and the series by creator Masamune Shirow. The movie really has that same look and feel that the GHOST IN THE SHELL anime and BLADE RUNNER have.  There are towering buildings with a lot of 3D advertisements making the city look even livelier from the tops of the buildings.  There are a lot of images on screen that are easily recognizable due to the director wanting a few matching shots from the anime. The casting is spot on with the actors looking so much like their anime counter parts.  Pilou Asbæk has embodied Batou from his haircut down to his build.  After he gets his eye implants, there is no doubt that he is made to play him.
Originally, there was a lot of hesitation when Scarlett Johansson got the role of The Major.  Mostly because a lot of people wanted an all-Asian cast to keep with the source material.  Honestly, I feel like she did a wonderful job due to her roles as Black Widow in the MCU and LUCY.  She has the training in hand-to-hand combat and her firearm skills.  Even how she delivers those sorts of emotionless lines like The Major has me convinced. Blu-ray
The transfer for the Blu-ray is a 1080p AVC presentation that looks excellent.  Whether it is night or day, the city is lit up with vibrant colors and neon signs everywhere.  There are also a lot of bold colors in the opening action scene indoors with the various kimonos that the attendees are wearing.  The details are high with some of the people’s face having distinct separations where their implants are or in the geisha’s case, it is where her face can open up.

4k UHD
The transfer is a 2160p HEVC presentation that does look incredible but it really is only slightly better than the Blu-ray.  One of the biggest differences is the brighter color.  Obviously, I’m talking about the same neon and bold clothing colors but even some of the muted colors make a bigger statement in this format.  The other big difference is in the rich, deep blacks.  There are a lot of dark scenes and shadowy areas that have great contrasting. 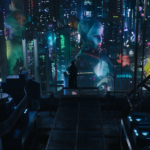 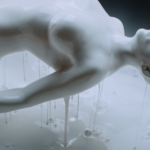 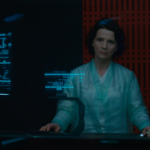 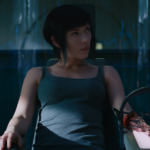 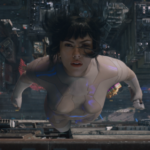 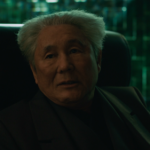 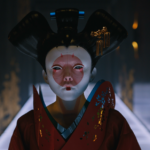 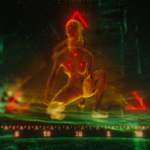 The audio is a Dolby Atmos mix that defaults to a Dolby TrueHD 7.1 mix.
There are plenty of action scenes with gunfire from various types of weapons.  The Major’s breach into Hanka has her both giving and taking shots.  The bullets wiz across the sound field and utilize the overhead speakers.  Even in the rear speakers of the 7.1 mix, the movements of bullets sounds excellent.  The LFEs of the explosions are strong and never seem like too much on the speakers.  In the majority of the action scenes, you can hear the distinct sound of concrete or stone as a part of the debris hit the ground.  Of course, there are a lot of action scenes throughout the movie but the scene with the Spider Tank working the theater the most.  The relentless bullets that are being traded back and forth between Major and the tank that is also firing the occasional rocket at her is the highlight of the release. -Hard-Wired Humanity: Making GHOST IN THE SHELL: This featurette is around 30-mins long and covers everything.

-Section 9: Cyber Defenders: This is a look at the team at Section 9 with a mix of pieces from the film.

-Man & Machine: The Ghost Philosophy: This is a look at how the core of the story parallels the way that humans want to evolve their own potential. This movie does a wonderful job of translating an extremely popular property to the screen.  Being a big fan of the series and original movie, GHOST IN THE SHELL is, in my opinion, a success.   The visuals are right, the characters, and even the casting.  My only gripe is that I’m not a fan of Michael Pitt but the idea of his character works for the plot.  Would I want to see them do sequel to this? Sure, but only if they get the same returning cast.  The release itself is superb on both Blu-ray and 4k UHD with stunning visuals that work well on either format.  The audio is also excellent with so many moving sounds that utilize the Atmos mix.  The bonus feature give plenty of insight into the making of the movie and the extra named “Hard-Wired Humanity: Making GHOST IN THE SHELL” is a must-watch.  Overall, this is a spectacular release that I highly recommend.