Meet R.  He’s a zombie stuck in this post-apocalyptic world and just bored by the monotony of everyday.  He just travels through the airport in his own head with his thoughts.  He hasn’t gone to the extreme change over like the moneys have. They are zombies that have just given up on taking care of themselves and they no longer resemble being human.

There are small pockets of humans that are tying to keep humanity alive and they train their own as scouts to hunt for supplies.  One day while R and his friends (a pack of zombies) are looking for food, they stumbled on a group gathering supplies.  One of the girls is named Julie and she parks something inside of R…something he hasn’t felt since he was alive.

WARM BODIES has been written for screen and directed by Jonathan Levine.  It is based on the novel of the same name by Isaac Marion.  It is a romantic comedy with a zombie movie mixed in.  The actors all do very well in their roles, but Nicholas Hoult has to play several characters in one.  He’s a zombie, he’s in love, he wants something more, and wants to be human.  He does well in everything that he is cast in so I like to see him in more movie or acting opportunities. 4k UHD
The video is a 2160p HEVC presentation that has some definite improvements.  Aside from the memory scenes, the entire movie has a dark tone to it with the lack of electric light with the filmmakers wanting everything to look so dreary.  The skin tones make it easy to distinguish the live people from the living dead.  There’s a nice grain that gives the images sharp lines and amazing contrasting.  This is easily seen in both the low lit and bright images.  It gives the clean images a slight roughness that makes sense for a movie with this type of tone.  There are also small makeup effects that stand out like the decomposing skin on the zombies like R and M.  You can see these blue veins running up their necks and on their faces.  The bright memory scenes have brilliant colors such as the greens and yellows.

Note: There is Dolby Vision on the release but I don’t have the equipment as of yet.

Blu-ray
The video is a 1080p AVC presentation that has an excellent look to it.  The blue is a mute hue and doesn’t have that same trueness that the 4k UHD does.  The other colors like human blood and the red in R’s hoodie really pop against the cold background.  The grain is strong and keeps with the tone of the movie. You can see that the characters have their normal camera makeup but they don’t look glamorous.  The skin tones are warm on the living and pale on the dead.  The boneys have sharp details with the dead flesh and tendons under the surface.  For a dingy looking world, the transfer is well done. 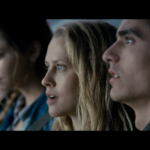 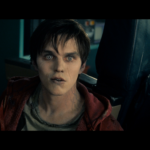 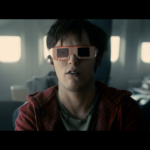 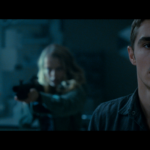 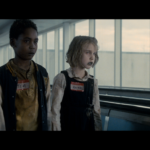 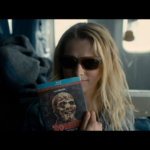 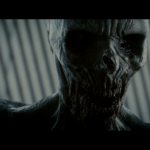 4k UHD
The audio is a Dolby Atmos mix that defaults to a Dolby TrueHD 7.1 mix.  The Atmos track is a vast improvement over the Blu-ray’s DTS-HD Master Audio 7.1 mix.  The sound field feels larger when the music is layered underneath R’s narration.  The score mixed with the soundtrack sound beautiful in the overhead channels.

The various environments also sound larger with the new mix from the semi-empty airport to the large sound of driving a convertible in a rainstorm.  The LFEs are adequate when they’re needed like from gunshots and engines.  The dialogue and other effects are well done.

Blu-ray
The audio is a DTS-HD Master Audio 7.1 mix.  Even if the Atmos mix has more power in certain places that doesn’t discount the mix on the Blu-ray.  The screeching from the boneys is creepy and clear.  R’s narration also has that omnipotent voice in every channel that is clear and at the right volume. -Boy Meets, Er, Doesn’t Eat Girl: This has some cast and crew interviews about the movie.

-R&J: This has the actors and filmmakers speaking about the love story aspect.

-A Little Less Dead: This featurette looks at the casting choices.

-A Wreck in Progress: The focuses on finding the locations for the movie.

-Bustin’ Caps: This featurette looks at some of the action in the movie.

-Beware the Boneys: This looks at the real horrors in the movie.

-Zombie Acting Tips with Rob Corddry: This is from Screen Junkies WARM BODIES is a beautiful love stories and the whole “undead thing” can take the wind right out of your sails.  But fear not, you get monsters, partying, vintage music, and zombies.  The 4k UHD is an improvement in both video and audio with the enhancements from the format.  The Blu-ray also has a solid transfer and looks excellent.  There is a pretty good set of extras here but they are only found on the Blu-ray.  Overall, this is a really good movie that covers a lot of genres in a smart way so I highly recommend picking it up.