Following the events of AVENGERS: AGE OF ULTRON, Thor has found himself imprisoned by Sutur, the fire demon.  He has been imprisoned there and is devising a way to get back to Asgard where Odin has hidden The Eternal Flame.  With it, Sutur can begin the Asgardian doomsday called Ragnarok and now is the perfect time with Odin missing from the throne.  This has solidified Thor’s suspicions that something is wrong at home and he heads back to the Realm Eternal.  As it turns out, Loki has been impersonating Odin and left him on earth.

When Thor drags Loki to earth, they run into Doctor Strange and he points them to Norway where their father is waiting for them.  As Odin comforts his son’s before his time ends, he tells them that his first born is the Goddess of Death named Hela and she has been exiled for years.  His death will allow her to be free and she is pissed.  Thor throws Mjölnir at her and she catches it…with one hand…and destroys it.  Thor and Loki try to flee back to Asgard and along the way, Hela knocks them from the Bifröst, sending them to who knows where…

THOR: RAGNAROK is directed by Taika Waititi and he is best known for WHAT WE DO IN THE SHADOWS.  He has made the characters relatable on a human level by making their interactions comical and lighter than any other Marvel movie to this point.  That’s saying a lot considering the GUARDIANS OF THE GALAXY Vol. 1 & 2 are loaded with comedy.  In this, you get to see Thor and Loki have more of a brother relationship than before.  It’s a welcome change from how things usually play out.  I think the biggest nod should go to Cate Blanchett as Hela.  Not only is she the first female Marvel villain on screen but also she is maybe the most ruthless so far and that says a lot next to Killmonger and The Vulture.  Her drive is more than revenge and she is unstoppable as well as immortal. 4k UHD
The video is a 2160p HEVC presentation that looks superb.  This is one of those movies that naturally has bold colors and doesn’t hold back when it comes to being flashy.  The green in Hela’s costume, the bright pastels in Thor’s gladiator outfit and pretty much everywhere on Sakaar have a brilliance that shines on 4k.  The visuals also have clean lines and the structures are directly based on the artwork of Jack “The King” Kirby.  In the darker scenes, the images maintain the inky blacks with the help of the HDR.

Blu-ray
The video is a 1080p AVC presentation and it holds it own for the format.  Like the 4k disc, the colors are vibrant and really show the spirit of the movie.  The skin tones are warm and natural.  The practical effects of the movie really standout with the various fabrics and makeup.  There are also plenty of objects in the foreground as well as the background that come through.  Blacks are also deep with minimal issues, even when there is smoke. 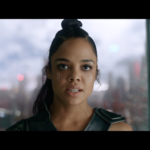 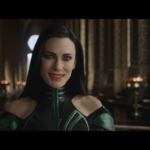 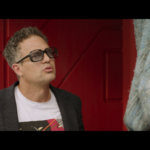 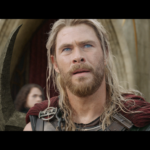 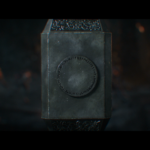 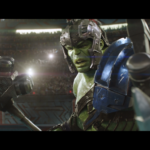 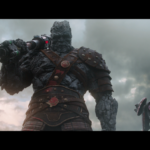 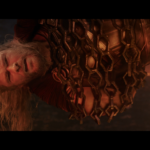 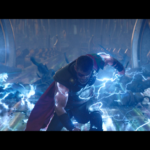 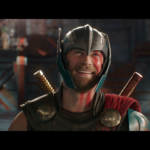 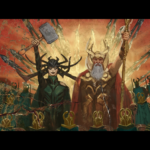 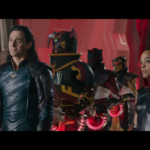 4k UHD
The audio on the 4k UHD is a Dolby Atmos that defaults to a Dolby TrueHD 7.1 mix that brings this film to life.  The use of the overhead speakers adds a lot of depth and sound movement.  Some of the best examples are the action scenes with Surtur and, of course, the fight scene with Hulk and Thor. The crowd noise surrounds them and moves with the camera.  When Thor hits the Hulk into the wall and he rolls halfway across the ring, you hear it in the speakers.  When Hela throws quick blades at people, the quick sounds that smoothly move in that particular direction sound awesome.  The LFEs don’t get much of a break with the music from Led Zeppelin’s Immigrant Song being cranked up or Mark Motherbaug’s sci-fi score.  All of these elements together make for an amazing track.

Blu-ray
The audio for the Blu-ray is a DTS-HD Master Audio 7.1 and it sounds incredible.  It makes up for the lack of the overhead channels by making the sound movement smooth in the rear speakers.  The heavy LFEs like Hulk’s roar and the hard-hitting punches in the gladiator ring.  The dialogue and effects are clear and prioritized well -Director Intro: This is an intro to the movie by Taika Waititi.

-Getting In Touch With Your Inner Thor: This is about the character in the films and in this film as well.

-Unstoppable Women: Hela & Valkyrie: This discuses the two awesome ladies in the film played by Cate Blanchett and Tessa Thompson.

-Finding Korg: This looks at Korg and Waititi’s bringing him to life.

-Sakaar: On the Edge of the Known and Unknown: This featurette looks at the new planet in the MCU.

-Journey Into Mystery: This looks at the film’s influences from the comics and Jack Kirby’s artwork.

-Team Darryl: This mockumentary about Darryl’s new housemate in America.

-Marvel Studios: The First Ten Years – The Evolution of Heroes: This discusses the MCU in the first 10 years and where it is going to lead up to Infinity War.

-8-Bit Sequences: These are some animated storyboards for the movie. It’s no secret that I love this movie because it is a fresh look at Thor’s corner of the universe, it has brought the Planet Hulk story to the screen, and director Taika Waititi has been incredibly respectful of the subject matter.  Both the 4k UHD and the Blu-ray have been authored well in both the audio as well as the video.  The 4k has the edge in both categories but the Blu-ray deserves top marks in the format.  The extras are very good but one thing I would’ve like to see or hear about is why the big change with the early Hela scenes that were changed from being in New York City and changing the location to Ireland.  Either way, if you have the equipment, make sure to pick up the 4k version and give your home theater a workout.