A family man named Michael MacCauley rides the commuter train into NYC every day.  He sees the same people on the train and noticing them is almost a part of his routine.  He is an ex-cop and up until today, sold life insurance.  There couldn’t be a worse time to lose his job with he and his wife scrounging together everything that they can to pay for their son’s upcoming schooling.  On the ride home today, he is approached by a woman named Joanna that poses a hypothetical question to him: if he was given $100,000 dollars in cash, could he locate a girl on this train that has something she shouldn’t.  When Joanna hands him a GPS tracker that he is to put on the target, he realizes that this isn’t hypothetical anymore.  Does he forget about the whole thing or does he take the money?

THE COMMUTER is directed by Jaume Collet-Serra.  He has made a few movies with the lead actor Liam Neeson such as UNKNOWN, RUN ALL NIGHT, and NON-STOP.  From the trailers, it felt like the movie was made by this combination and the movie has the same feel as NON-STOP.

This time around, the plot points that need explaining happen right up front so that by the time the movie gets on track (see what I did there), you already have most of what you need to be able to enjoy the action.  Neeson’s character is an interesting mix being that he is a salesman and cop so he has a good sense of reading people.  It is a clever way to make an ordinary person make it through an extraordinary situation. 4k UHD
The video is a 2160p HEVC presentation that has a clean look on the UHD.  Even though the movie was filmed digitally, the filmmakers kept a grittier look in the images.  There is a nice and prominent grain that gives it that character rather than looking too refined.  It’s a nice mix of seeing the clean office setting where Michael works to the not so clean commuter train.  Speaking of the train, the higher detail level makes the train look grimier in 4k.  The details are sharp in the best places.  Skin tones are natural and warm regardless of the lighting.  No line on Neeson’s face can hide from the level of detail that this format it working with.  HDR gives some of the blacks and lower lit areas definition.

Blu-ray
The video is a 1080p AVC presentation.  The Blu-ray is only slightly less impressive compared to the 4k disc.  The close-up shots show the details in faces and fabrics of whoever is on screen.  There are a few exception but the colors are muted from the sun going down and the lessening light.  The blacks are still deep with no real issues in the darker scenes. 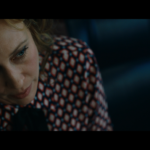 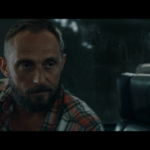 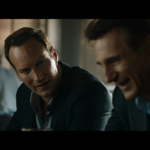 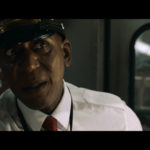 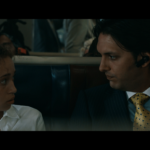 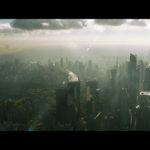 The audio is a Dolby Atmos mix that is on both the 4k UHD and the Blu-ray.  It has plenty going on from the start with the news coming from Michael’s alarm clock.  Where the audio really steps up is when the movie shifts to the train.  It becomes immersive when the constant sound of the cars on the rails is coming from every speaker.  The overhead speakers also have plenty of movement no matter where on the train the movie is happening.  The effects from people in altercations, when the focus is on the outside of the train, and the ascension to the climatic ending all sounds incredible.  The dialogue is all natural and well prioritized on the busy mix. -End of the Line: This has some interviews with the cast and crew about the movie.

-Off the Rails: This is similar to the other extra but it focuses on the construction of the set at Pinewood. THE COMMUTER is reminiscent of the noir cinema with the whole filming happening on a train like a Hitchcock film.  Neeson does a good job but the character is very familiar.  As for the release, the 4k disc has noticeable improvements with sharper details and deeper blacks.  The Atmos audio is the perfect choice for the constant movement and effects in the mix.  I would’ve liked to have seen some more in the extras but the way that they used the train set is interesting.  Overall, I highly recommend checking out this movie for the entertainment and your home theater setup will appreciate it.