Power Rangers Ninja Steel is the twenty-fourth season of the long-running American children’s television program Power Rangers. The season was produced primarily using footage, costumes, and props from Japanese Super Sentai series Shuriken Sentai Ninninger with minimal costume and prop elements being recycled from Ressha Sentai ToQger. The show is produced by Saban Brands and premiered on Nickelodeon on January 21, 2017 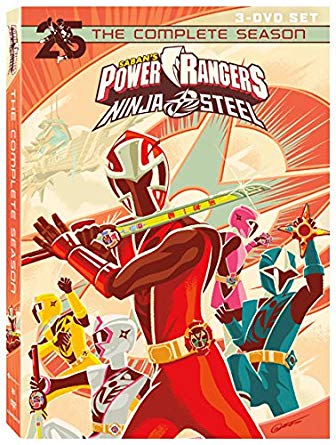 The Power Rangers are back at it again as they retrieve Power Stars from the prism to morph into Ninja Steel Power Rangers. Galvanax is champion of a popular tv game show Galaxy Warriors and is trying to become invincible by controlling the mythical Ninja Nexus Prism. That said he is furious at the rangers and sends his warrior contestants down to earth to steal the prism and thus we get lots of epic battles.

In Season 2 the Super Ninja Steel Rangers face off against an old arch nemesis who happens to still be alive, Madame Odius. She is comitted to stealing the Ninja Nexus Prism to revive its powers to cause havoc. Little does she know that with the help of some friends the Rangers will stop at nothing to save the world.


The video quality for the DVD is on par with most DVDs but looks quite well when upscaled in our Oppo Blu-ray player. Fans of the franchise will be pleased as they are quite used to DVD releases save for the upcoming SteelBook editions that will have one blu-ray. Something you Ranger fans might like to check out from Shout Factory.


Power Rangers Ninja Steel comes to DVD with a 5.1 Dolby Digital audio track that for the DVD format is actually quite nice compared to say a 2.0. The audio handles the shows quite well and suffice to say would be excellent for the target audience.


The show features a nice slipcover with art from illustrator and comic artist George Caltsoudas. In addition there is a booklet with art from many wonderful artists and designers.