BlacKkKlansman is a 2018 American biographical comedy-drama film directed by Spike Lee and written by Charlie Wachtel, David Rabinowitz, Kevin Willmott, and Lee, based on the 2014 memoir Black Klansman by Ron Stallworth. The film stars John David Washington as Stallworth, along with Adam Driver, Laura Harrier, and Topher Grace. Set in 1970s Colorado Springs, the plot follows the first African-American detective in the Colorado Springs police department, who sets out to infiltrate and expose the local chapter of the Ku Klux Klan. 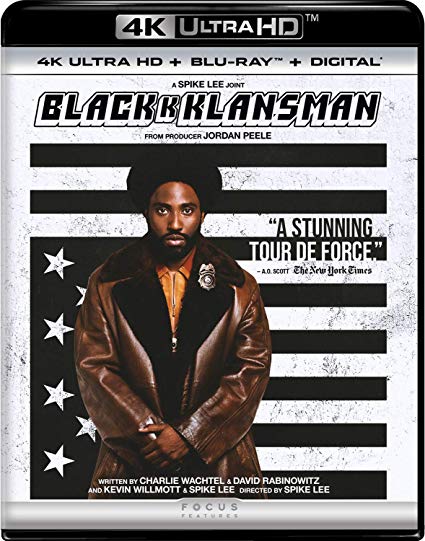 
BlackKklansman takes place in the late 70’s and is based on the memoirs of Ron Stallworth (our main character) the film does a great job of transplanting us into the era with the music, fashion, and haircuts of the time period. Ron is a young black brother looking to make a difference and start to change views from the inside out by becoming a police officer in Colorado Springs. He’s quickly thrown a dead end role in the records department, but his ambitious cunning attitude leaves an impression that quickly gets him an undercover gig in which he had hoped. After succeeding in his first role, he’s transferred to the unit permanently. It’s not long after he sees an ad in the newspaper for the KKK.

Ron in his best proper English voice calls the number and expresses his interest in in joining the “Organization”. From there Adam Driver’s character really heats up as Ron cannot show up to this meeting being a black male. So instead Flip must now become Ron Stallworth the character on the phone whilst Black Ron Stallworth handles all the phone calls.

After the first meeting, the case gets an official greenlight for more investigation which ultimately leads to some suspicious leads to follow which culminate in the final act of the film. (I’m not spoiling it for you.) The Director of this film is none other than Spike Lee, and his stylistic approach makes it pretty obvious for a cinephile like myself. One could even argue there is shades of Tarantino. That or perhaps sometimes Tarantino has shades of Spike Lee. It’s no wonder there was a beef between the two long ago. The film has some very powerful montages at the end showcasing how much of the tones of the film from the 70’s is becoming relevant today. Additionally there are some great innuendos throughout the film that would make one think or comically laugh at the surrealism of that of today. In an “oh how right you are” such a way most notably with similarities to our President.


BlacKkKlansman comes to Ultra HD Blu-ray 4K with Dolby Vision. The picture is superb, deep rich blacks and the dark scenes look full with depth. Great outdoor shots, and the DP definitely sets the tone for the time period the film is set in. The late 70’s feel like the late 70’s largely because of what we get with this visual treat in Ultra HD Blu-ray 4k.


BlacKkKlansman comes to Ultra HD Blu-ray 4K with a dolby atmos track that will blast away your living room with the songs and soul of the 70’s. The film does not hold back musically and thus it’s a treat for your home entertainment system and/or soundbar set up etc. The bass receives it’s fair share of play in these instances, and the fronts will be primarily used throughout the film but the overall there is a nice immersive soundtrack.


The special features are on both the UHD and the Blu-ray Disc.

BlacKkKlansman’s UHD and Blu-ray release has but only one featurette and an extended trailer. Also included is a digital copy via MOVIESANYWHERE.

The film is produced by Lee, Raymond Mansfield, Shaun Redick, Sean McKittrick, Jason Blum, and Jordan Peele. Redick purchased the film rights to the book in 2015, and Lee signed on as director in September 2017. Much of the cast joined the following month, and filming began in New York State. – wikipedia