Venom is a 2018 American superhero film based on the Marvel Comics character of the same name, produced by Columbia Pictures in association with Marvel and Tencent Pictures. Distributed by Sony Pictures Releasing, it is the first film in Sony’s Marvel Universe, adjunct to the Marvel Cinematic Universe (MCU). 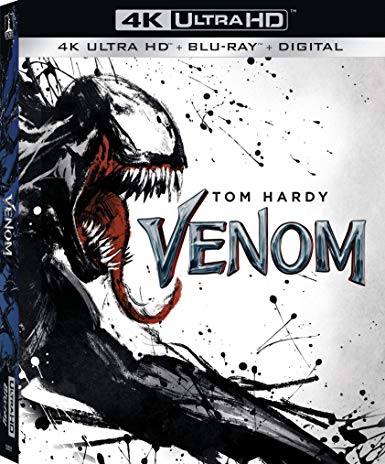 
VENOM seems to be a movie that may require some acquired taste. Upon first viewing the film seemed to drag on a bit and/or was just all over the place at times. However I could immediately tell that this was more a film that suffered from the crazy hype it received prior to it’s theatrical release. On one hand that is great to get people into the theater, however sometimes it causes higher expectations that it can even achieve. That said after having seen it once and knowing what to expect the film was much better on subsequent viewings. Tom Hardy is still a top notch actor and believable in his role of Eddie Brock. The film ends with quite a cliffhanger and the introduction of Woody Harrelson that thanks to a great box office we will all get to experience a sequel that I’m confident will blow this one out of the waters.


The strongest parts of this release is that of the video quality and the audio quality. VENOM looks down right amazing in the video quality department. The dolby vision intensifies the darks and blacks which are heavy in this film and they look strongly on point! Deep and rich!


Much like the sentiments of the video quality the audio quality is downright superb. Strong vocals, great immersive experience with the Dolby Atmos whether your listening through your receiver home theater set up or through a dolby atmos compatible soundbar you’ll be pleasantly surprised. Lots of action in the rear speakers, and clear hard quality pumping out your fronts and center. In the special features is included the Eminem music video “VENOM” and it’ll put your bass to work!


Venom Mode: When selecting this mode the film will engage informative pop-ups throughout the film to provide insight on the movie’s relationship to the comics, and to reveal hidden references that even a seasoned Venom-fan may have missed!

Deleted & Extended Scenes: These deleted and extended scenes will give fans even more of the Venom action they loved in theaters!
Ride to Hospital – Eddie and Venom take a ride to the hospital.

Car Alarm – Let’s just say that Venom is not fond of car alarms.

From Symbiote to Screen: A mini documentary about the history of Venom in comics and his journey to the big screen. Interviews with Avi Arad, Matt Tolmach, Ruben Fleischer, Oliver Scholl, and Director and Comic Fanboy Kevin Smith.

The Lethal Protector in Action: Go behind the scenes with the production crew and learn the secrets behind the awesome Motorcycle stunts, wire stunts, and drones.

Venom Vision: A look at how Ruben Fleischer came to the project, gathered his team, and made Venom a reality. Utilizes interviews from cast, crew, and producers as well as Fleischer himself.

Symbiote Secrets: Blink and you may have missed it! Enjoy the hidden references throughout the film.

“Sunflower” by Post Malone, Swae Lee (From Spider-Man: Into the Spider-Verse)

Spider-Man: Into the Spider-Verse Sneak Peek: Meanwhile in another universe

Venom was released in the United States on October 5, 2018, to generally negative reviews from critics for its script and inconsistent tone. However, some praised Hardy’s performance and the chemistry between Brock and Venom, and the film went on to be an unexpected box office success, becoming the fifth highest-grossing film of 2018 with over $854 million worldwide and setting several box office records for the month of October. A sequel is in development. – wikipedia