At a traveling haunted park called Hell Fest, there is a girl who is being chased by a man named The Other and he has been following her since she entered the park. He boxes her into a dead end and stabs her. There are props of dead bodies hanging from the ceiling and The Other hangs her body; hidden in plain sight.

Some time later, a girl named Natalie arrives at her best and childhood friend Brooke’s apartment where she used to live. She moved back home but when she arrives, she finds out that Brooke has moved in with her college friend Taylor. The three girls are going to Hell Fest with Brooke’s boyfriend Quinn, Taylor’s boyfriend Asher, and the guy that they are hooking Natalie up with, Gavin.

HELL FEST is directed by Gregory Plotkin who has worked in horror before and directed PARANORMAL ACTIVITY: THE GHOST DIMENSION. The premise of the movie is really interesting. The idea that The Other could commit these crimes in basically plain sight is the hook. People at these shows would think that it’s a part of the act. The environment that the filmmakers put together to feel like a real carnival is spot on. The practical effects that they employ at the parks and the various houses to get to hell makes the viewer feel that unease that the parks create.

The video is a 1080p AVC presentation that has a really nice transfer. The majority of the movie is at night. The blacks are deep and has some solid contrasting with the people. The bright coloring of the neon and lights is also nice against the blacks. There isn’t any banding that I could see and that’s important with the heavy use of fog or smoke that the filmmakers use. Detailing is incredible with all of the masks and makeup not getting lost in the video. 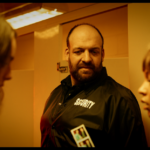 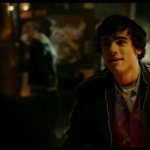 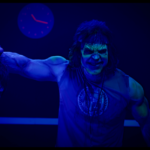 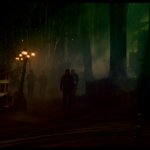 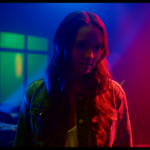 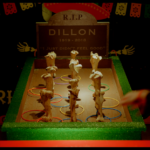 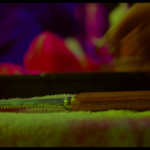 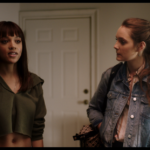 The audio is a DTS:X mix that will default to a DTS-HD Master Audio 7.1 mix depending on your equipment. This track is incredible. They use of all of the speakers to create an immersive experience that really makes you feel like you are at this carnival. Sounds of things both in the distance and the crowds of people passing is clear. The LFEs are strong and the sound comes in these clean waves. The mix is busy and that’s in a good way. Dialogue and effects are prioritized well.

-Thrills and Kills: Making Hell Fest: This featurette has a lot of good info from the cast and crew about bringing the film together.

HELL FEST is a slasher flick and its a fresh take on the genre. The some of it can be a bit predictable but it is still a fun watch. The group of actors really feels like they are all friends and have been for a long time. There is a natural chemistry that is great to see in any genre. The video is sharp and the audio is spectacular. There is really only one extra included but it is worth watching. Overall if you like horror, make sure to check this out and have a DTS:X theater for screening.