Ralph Breaks the Internet (originally titled as Ralph Breaks the Internet: Wreck-It Ralph 2) is a 2018 American 3D computer-animated comedy film produced by Walt Disney Animation Studios and distributed by Walt Disney Pictures. It is the sequel to the 2012 film Wreck-It Ralph, making it Disney’s 57th feature-length animated film. The film was directed by Rich Moore and Phil Johnston (who wrote the screenplay with Pamela Ribon), and executive-produced by John Lasseter, Chris Williams, and Jennifer Lee. 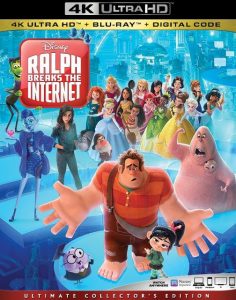 
Ralph Breaks The Internet is set 6 years after the first installment. (Wreck It Ralph) Wreck-It Ralph and Vanellope von Schweetz still remain the best of friends where they often hang out in Litwak’s family fun center and arcade after work. Life seems grand for good ole Ralph but Venellope yearns for more as her game has become all too predictable. Ralph attempts to add a secret bonus track to her game only for it to cause a glitch and Vanellope ends up breaking the wheel to her cab. The game is then set to be unplugged until a replacement can come. Since the Company that made the game is now defunct and the parts to repair it are too much the game must be shut down for good. This will leave the game’s characters homeless.

After a talk with Fix It Felix, Ralph is now convinced he needs to enter the Internet and buy the piece from ebay. Ralph brings Vanellope with him, and although they place a winning bid of $27,000+ for the wheel, they obviously cannot pay and must make the purchase within 24 hours. The two look to J.P Spamley to quickly make money, receiving a lucrative job of stealing a car belonging to Shank from the MMORPG Slaughter Race. While Ralph and Vanellope steal the car, they are forced to return it. Shank takes to Vanellope’s driving skills and points the duo towards Yesss at BuzzzTube, where Ralph decides makes a series of viral videos playing off trends to earn the money.

Lots of laughs and hilarity ensue and the film is a great sequel to the smash hit that was Wreck It Ralph. Also nominated for an Oscar, Ralph Breaks the Internet is getting it’s just due not only financially, but critically. It would only seem obvious a trilogy is in the making.


Ralph Breaks The Internet comes to Ultra HD Blu-ray from a 2k source, but still looks amazingly well. Sharp and bold where needed whilst rich and lush throughout many of the scenes that the colorful film franchise that is Wreck It Ralph provides. Colors pop vibrantly, and the Ralph films are that of those that have about as much color palettes as any since perhaps Speed Racer. If you have a quality TV & Player, then you will be pleased guaranteed as this is a visual treat for the eyes.


Ralph Breaks The Internet comes to Ultra HD Blu-ray with a Dolby Atmos track while the blu-ray serves up a DTS-HD MA 7.1 lossless track. Everything sounds great in both the Atmos track and the 7.1 set up as we tested in 2 environments. The bookshelf speakers in the 7.1 set up didn’t offer much, and I felt the Atmos felt more immersive. Never the less both provided stellar tracks that allow Ralph Breaks The Internet to sound as quality as it looks.

How We Broke the Internet –Go behind the scenes at Walt Disney Animation Studios to get an in-depth look at how the filmmakers brought a world to life that billions of people visit every day but never actually see – the internet. Take a front-row seat as the team reveals the inspirations for the story and what it took to bring it to the screen. Discover all that went into developing the characters of the film including netizens like KnowsMore as well as characters like Double Dan. See the lengths the team took to create the car chase scenes in Slaughter Race and much, much more.

Surfing for Easter Eggs – Surf the web for the near-countless Easter Eggs, inside jokes and references hidden throughout the movie.

BuzzzTube Cats – Many videos were created by the animators to fill the screens of the Internet world…and lots of them are of cats! Check out the BuzzzTube to watch this hilarious cat compilation.

Music Videos – “Zero” by Imagine Dragons and “In This Place” by Julia Michaels.

Baby Drivers – Slaughter Racing School – Take a spin behind the wheel with the artists behind Ralph Breaks the Internet as they go to race car driving school.

The first discussions about a sequel to Wreck-It Ralph began in October 2012, and the new installment went through three different scripts before the filmmakers settled on the final plot. When the film was officially announced in June 2016, much of the original cast confirmed they had signed on, with new cast members added in 2018. – wikipedia