The Witch (stylized onscreen as The VVitch: A New England Folktale) is a 2015 period supernatural horror film written and directed by Robert Eggers in his directorial debut. 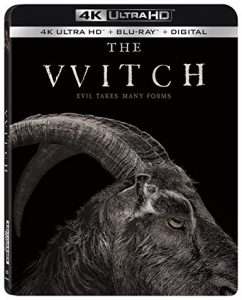 In 17th century New England, family has been exiled from a Puritan plantation due to the crime of “prideful conceit”. William, his wife Katherine, the oldest daughter Thomasin, oldest son Caleb, and the twins Mercy and Jonas move to a farm near the woods. They take it in as god has granted them a miraculous piece of land. After a few months, Katherine gives both to a baby boy called Samuel. One afternoon, Thomasin is lying in a field near the woods with Samuel and while playing peek-a-boo with him, the baby vanishes. There is nothing in any direction and she immediately runs into the woods to look for him. Ahead and out of view, a red-cloaked woman runs through the woods with the stolen child and back to her cabin. The cloaked woman is a witch and she does something horrible to the child for a spell. After searching for hours and with no one to turn to, the family stops searching and faces the inevitable. Grieving, blaming god, and completely distraught; the family finds that this is only the beginning of their worries.

THE WITCH comes to Ultra HD Blu-ray 4k with Dolby Vision. A film of this nature definitely benefits from the dynamic HDR that dolby vision brings forth. A murky film that allows the darks to be deeper with UHD and help really feel immersed in this film.

The film has a gloomy tone and the farm goes through some of the typical weather in New England. There is mist in the fields and you can practically feel the textures of the surroundings. There are a couple of moments where there are brighter colors with deep reds and yellow but it is rare. Things on screen stay on the beige side of the color spectrum. The skin tones are natural for the most part but they can get a little washed out at times. This is most likely because of the paleness of the hues. As for detailing, the lines in the clothing and especially the faces are sharp and easy to see. It keeps the illusion that these people didn’t wear make-up and lived in some unforgiving places in that part of the country.

The audio is an English DTS-HD Master Audio 5.1 mix.

The audio mix of the film is rich with ambient sounds of the woods and the farm. As I mentioned earlier, there are times where you can practically feel the cold wind blowing through the trees and you can hear some of the nocturnal animals. The score is also spot-on for keeping the creepy tone . Violins and fiddles can be the creepiest instruments in a movie if they’re done right. The music is its own entity and towards the end, there is chanting which conveys the growing presence from the witches. With everything that is in the audio mix, I would still call this film dialogue centric with most of the speaker use in the front. The voices have been replicated clearly and sound incredibly natural. This is a superb mix and it definitely caught me by surprise.

An international co-production of the United States and Canada, the film premiered at the 2015 Sundance Film Festival on January 27, 2015 and was widely released by A24 on February 19, 2016. The film received positive reviews and was a box office success, grossing $40 million against a budget of $4 million. – wikipedia