The Lego Movie 2: The Second Part is a 2019 computer-animated adventure comedy film produced by the Warner Animation Group and distributed by Warner Bros. Pictures. A direct sequel to The Lego Movie (2014), it is directed by Mike Mitchell, with Phil Lord and Christopher Miller (writers and directors of the first film) returning as producers and writers. 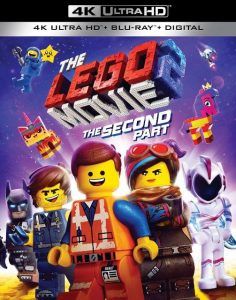 Following up on the success of the first LEGO MOVIE comes The LEGO Movie The Second Part with the cast returning and a new harrowing adventure we’re in for a ride! Set five years later after the first Bricksburg gets invaded by LEGO Duplo Invaders from outer space. However it will also feature our heroes having to travel far away to test their building skills in another galaxy in order to save the day.

The LEGO Movie The Second Part comes to Ultra HD Blu-ray 4K with HDR that helped qualify for the Ultra HD Premium Label. A label bestowed upon titles with great video and audio quality merit. That said this animated film in 4K is no slouch. Of course that comes with the HDR that helps the brights light up your screen. Animated films look great in blu-ray, but with the right HDR they look stunning in Ultra HD Blu-ray. The Lego Movie 2 is no different.

The LEGO Movie The Second Part comes to Ultra HD Blu-ray 4K with a Dolby Atmos track that really helps propel this sensation to the next level. LEGO movies have all the sounds of action movies in combination to song numbers that allow this Atmos track to impress.

LEGO Sets in Action: Animations of LEGO products for The LEGO Movie 2.

The Lego Movie 2: The Second Part was released in the United States and United Kingdom on February 8, 2019, in 2D, 3D, RealD 3D, Dolby Cinema, IMAX, and IMAX 3D formats. It received generally positive reviews from critics, who commended its humor, animation, soundtrack, and voice acting, although some said it was not as “fresh” as the first film. The film has grossed over $190 million worldwide against a budget of $99 million. – wikipedia