Crank is a 2006 American action film[3] written and directed by Mark Neveldine and Brian Taylor (in their directorial debuts) and starring Jason Statham, Amy Smart and Jose Pablo Cantillo. The plot centres on a British hitman in Los Angeles named Chev Chelios who is poisoned and must keep his adrenaline flowing constantly in order to keep himself alive. He does so by various methods including taking drugs and getting into fights, while he tries to track down the man who poisoned him. 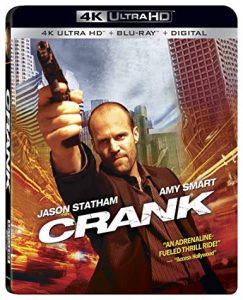 Written and directed by Mark Neveldine and Brian Taylor (directorial debuts) and starring Jason Statham, Amy Smart and Jose Pablo Cantillo. CRANK a 2006 pure adrenaline rush thrill ride type of film allowed Jason Statham to come into his own post Transporter while at the same time propelling him to the stardom to come.

Jason Statham plays Chev Chelios who is an English hitman based in L.A. working for a crime syndicate helmed by Don Carlito Carlos. Contracted to kill off Triad mafia boss, Chelios accomplishes the job only to be a patsy in which another hitman is to to kill him hoping for no retaliation from the Triads.

While asleep that night the next day Chelios house is broken into and he is injected with a Chinese synthetic drug that ultimately will slow the heart rate down until death. The catch is that if he can keep his heart rate up he can survive until he can get the anecdote. This is where pure insanity occurs in the attempt to stay cranked up and alive!

CRANK comes to Ultra HD Blu-ray disc with Dolby Vision dynamically giving us HDR10+ comparably that makes the film look richer then it ever has. Deep darks, vibrant brights and there is nothing to complain about. Many outdoors shots just further allow for this one to shine.

CRANK comes to Ultra HD Blu-ray with Dolby Atmos audio that blasts through your living room or home theater to bring forth the adrenaline rush that is CRANK in hard hitting immersive audio! CRANK has never sounded better and this audio track is welcomed with the visual treat that is the Dolby Vision combined.

The film was shot on location in Los Angeles. Co-directors Mark Neveldine and Brian Taylor operated both “a” and “b” cameras, where one would get a wide shot and the other would get a close-up shot. Jason Statham did all of his own fight and car stunts, including the fight with Verona in a helicopter 3,000 feet above Los Angeles. – wikipedia