The Lion King is a 2019 American musical film directed and produced by Jon Favreau, written by Jeff Nathanson, and produced by Walt Disney Pictures. It is a photorealistic live-action remake of Disney’s traditionally animated 1994 film of the same name. The film stars the voices of Donald Glover, Seth Rogen, Chiwetel Ejiofor, Alfre Woodard, Billy Eichner, John Kani, John Oliver, and Beyoncé Knowles-Carter, as well as James Earl Jones reprising his role from the original film. 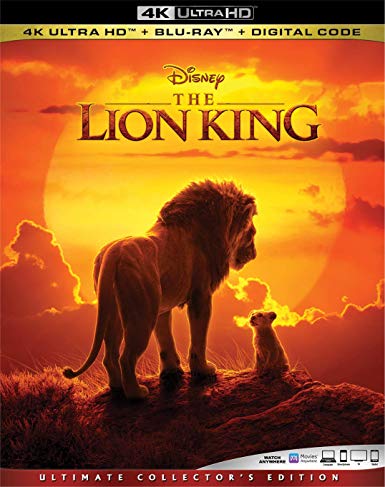 The Lion King comes to UHD with a strong Dolby Atmos audio track, but at times is a bit lackluster. Disney stopped short of Dolby Vision or other specs and we get 4K HDR only. Granted from a 2k intermediate perhaps that is why. Never the less it still looks sharp and stunning and the sun pours in as if you to were in Africa. The audio while still amazing just felt a bit low in some scenes that should have been scenes that would have rocked my socks off. Stampede anyone?

DIGITAL EXCLUSIVE:
Pride Lands Pedia –Dung beetle shares the importance of his “roll” in the African Savanna in a fun, bug’s eye view of the land and its inhabitants.

BLU-RAY & DIGITAL BONUS:
The Journey to “The Lion King”
The Music – Go inside the studio with the cast and crew as they work to honor and elevate The Lion King’s beloved music.
The Magic – Discover how the filmmakers blended the traditional filmmaking techniques with virtual reality technology to create amazing movie magic.
The Timeless Tale – Filmmakers and cast reflect on the story that has moved generations and share how this Lion King carries a proud legacy forward.
More to Be Scene – Recording studio and layer-by-layer progressions of some of most iconic moments in “The Lion King.”
“Circle of Life” – Peel back the layers of effects and go behind the scenes of this iconic musical moment from the film
“I Just Can’t Wait to Be King” – See all the effects, talent and fun that went into creating this vibrant version of “I Just Can’t Wait to Be King” for the movie
“Hakuna Matata” – Join Donald Glover (Simba), Seth Rogen (Pumbaa) and Billy Eichner (Timon) in the studio for the making of this memorable scene.

Protect the Pride –Director Jon Favreau, the Lion Recovery Fund and conservationists highlight efforts to protect the majestic lions and their home.

The film was theatrically released in the United States on July 19, 2019. It has grossed over $1.6 billion worldwide, surpassing Frozen as the highest-grossing animated film, and is also the second highest-grossing film of 2019 and seventh-highest of all-time. It received mixed reviews from critics, with praise for its visual effects, music, and vocal performances. – wikipedia