Avatar: The Last Airbender (Avatar: The Legend of Aang in some regions) is an American animated television series created by Bryan Konietzko and Michael Dante DiMartino. It aired on Nickelodeon for three seasons, from February 2005 to July 2008. Avatar is set in an Asiatic-like world in which some people can manipulate the classical elements with psychokinetic variants of the Chinese martial arts known as “bending”. 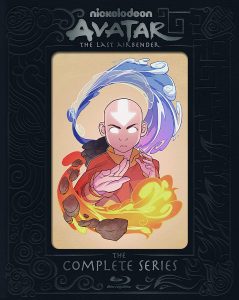 Water, Earth, Fire, Air. Four nations. One war-torn world. Celebrate the 15th anniversary of the epic saga, Avatar: The Last Airbender, with this 3 SteelBook® collection, featuring all-new art for each book! Go back to the beginning to experience the animated series that quickly became a phenomenon with a huge fan base that spans the globe! This complete collector’s edition includes all three powerful books: Water, Earth, and Fire.

The Avatar upholds the balance between the nations, but everything changed when the Fire Nation invaded. Only the Avatar, master of all four elements, can stop them. But when the world needs him most, he vanishes. A hundred years later Katara and Sokka discover the new Avatar, an airbender named Aang.

AVATAR The Last Airbender Complete Series comes to blu-ray in a special SteelBook box set. The series features 1080p blu-ray goodness while the audio track is merely DTS Audio 2.0. However, that is to be expected with many series that come to blu-ray from TV. Quite the norm actually when comparing against all TV releases. (especially if excluding the likes of premium TV like HBO etc.) The series looks great on blu-ray and provides great bitrate and bandwidth direct as opposed to streaming and the audio does a fine job to boot. You’ll love diving back into this iconic franchise. 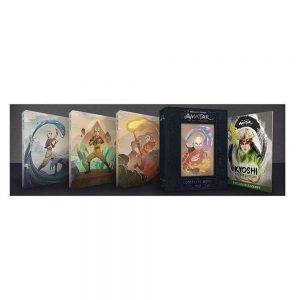