Jojo Rabbit is a 2019 American comedy-drama film written and directed by Taika Waititi, based on Christine Leunens’s book Caging Skies. Roman Griffin Davis portrays the title character, Johannes “Jojo” Betzler, a Hitler Youth member who finds out his mother (Scarlett Johansson) is hiding a Jewish girl (Thomasin McKenzie) in their attic. He must then question his beliefs, while dealing with the intervention of his imaginary friend, a fanciful version of Adolf Hitler (Waititi). The film also stars Rebel Wilson, Stephen Merchant, Alfie Allen, and Sam Rockwell. 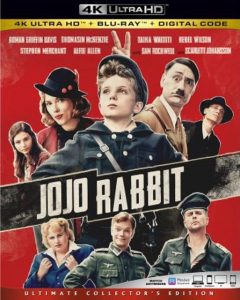 Acclaimed writer-director Taika Waititi brings his signature humor and pathos to JOJO RABBIT, a World War II satire that follows a lonely German boy (Roman Griffin Davis as Jojo) whose world view is turned upside down when he discovers his single mother (Scarlett Johansson) is hiding a young Jewish girl (Thomasin McKenzie) in their attic.

JOJO RABBIT fresh off the heels of its Oscar success comes to Ultra HD Blu-ray with a DTS HD Master audio 5.1 track and High Dynamic Range. The HDR definitely helps boost some of the vibrant brights in scenes and darkens to great depth the blacks. However the film has a lot of muted tones, dreary colors like tan, grey, black and white that likely are suited fine with simply regular blu-ray. The forest landscape however pops with luscious green eye candy. The audio track blares and songs from the likes of the Beatles will be an earful bliss. You likely won’t miss an Atmos track.

Jojo Rabbit was chosen by the National Board of Review and the American Film Institute as one of the ten best films of the year. At the 92nd Academy Awards, the film received six nominations, including Best Picture and Best Supporting Actress for Johansson, winning Best Adapted Screenplay. – wikipedia