Jumanji: The Next Level is a 2019 American fantasy adventure comedy film directed by Jake Kasdan, and co-written by Kasdan, Jeff Pinkner and Scott Rosenberg. It is a sequel to 2017’s Jumanji: Welcome to the Jungle, is the second follow-up to 1995’s Jumanji, and is the fourth installment in the Jumanji franchise.

Purchase Jumanji The Next Level on Ultra HD Blu-ray Today! 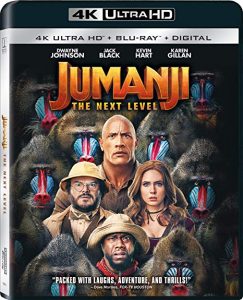 When Spencer goes back into the fantastical world of Jumanji, pals Martha, Fridge and Bethany re-enter the game to bring him home. But the game is now broken — and fighting back. Everything the friends know about Jumanji is about to change, as they soon discover there’s more obstacles and more danger to overcome.

JUMANJI THE NEXT LEVEL comes to Ultra HD Blu-ray 4K with HDR and a Dolby Atmos track. The accompanied blu-ray has a DTS HD Master track. Loads of action across many landscapes allow for the audio to impress and the visuals to shine. Whether it’s in a dune buggy racing for their lives, or in a jungle escaping death. JUMANJI THE NEXT LEVEL is an audio and visual treat.

– “Rhys Darby Wants To Jingle”: How do you top Jack Black and Nick Jonas’s unforgettable theme song for the first one? Everyone’s favorite Non Player Character, Rhys Darby is ready to take it to the next, next level.

– “Body Swapping: Snapping Into Character”: “In the latest Jumanji adventure, the avatar roles are turned on their heads with new characters and hilarious performances.”

– “Back Together: Reuniting the Cast”: Dwayne Johnson, Kevin Hart, Karen Gillan and Jack Black are back and better than ever as they share their excitement to reunite.

– “Level Up: Making Jumanji: The Next Level”: From breathtaking scenery, wild adventure, new characters and more- go behind the scenes with the cast and crew as they take Jumanji to the Next Level.

– “Scene Breakdown: Ostrich Chase”: Jump in your dune buggy and go inside the epic ostrich chase scene as the filmmakers and visual effects team breakdown the creation of this memorable scene.

– “Scene Breakdown: Mandrill Bridges”: Moving rope bridges, giant mandrills and incredible stunt work make the mandrills attack one of the most adrenaline pack parts of this film. In this scene breakdown, see how they pulled it off.

– “Awkwafina Cat Burglar”: To prepare for her roles as pick pocket, Ming Fleetwood, superstar Awkwafina got a little too method behind the scenes.

– “Grow Up:” Danny DeVito and Danny Glover help Dwayne Johnson and Kevin Hart get in touch with their inner grumpy old men.

– “Telenovela”: Kevin Hart gets lost in translation in this melodramatic promo.

– “VFX Pre-Vis: Ostrich Chase”: Track the progression from pre visualization to finished scene in a side by side comparison of the ostrich chase.

– AR GAME: The 4K UHD, Blu-ray and DVD include a collectable map that is fully interactive, employing Augmented Reality to bring Jumanji to life through a smart phone, allowing users to create their own 8-bit Avatar, navigate a series of mini games and much more!

Jumanji: The Next Level was theatrically released in the United States on December 13, 2019 by Sony Pictures Releasing, under its Columbia Pictures label. The film received generally positive reviews from critics and grossed $796 million worldwide against a $125 million budget, becoming the tenth highest-grossing film of 2019.- wikipedia