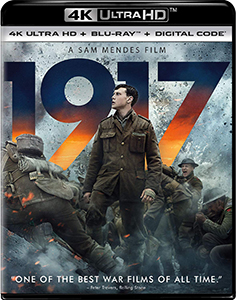 During World War I, two British soldiers — Lance Cpl. Schofield and Lance Cpl. Blake — receive seemingly impossible orders. In a race against time, they must cross over into enemy territory to deliver a message that could potentially save 1,600 of their fellow comrades — including Blake’s own brother.

1917 comes to Ultra HD Blu-ray 4K with HDR10 Dolby Vision and Dolby Atmos English, along with French and Spanish 7.1 Dolby Digital Plus. 1917 has the perfect pace and cinematography that lead greatly to the pairing of the audio and video and that is what makes this pairing of Dolby Atmos and Dolby Vision shine. We have no complaints here, an exhilarating experience that comes highly recommended.