Ip Man 4: The Finale is a 2019 Hong Kong martial arts film directed by Wilson Yip and produced by Raymond Wong. It is the fourth and final film in the Ip Man film series based on the life of the Wing Chun grandmaster of the same name and features Donnie Yen reprising the role. 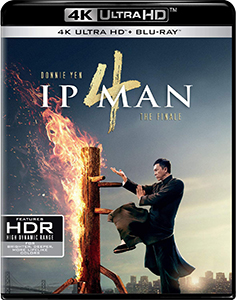 In 1964, following the death of his wife, Ip Man discovers he has throat cancer due to smoking. After his rebellious son Ip Ching fights back against a bully and is expelled, Ip decides to travel to San Francisco to look for a school. His student, Bruce Lee, has upset the local martial arts community in San Francisco by opening a Wing Chun school, teaching the Americans martial arts and writing an English language book on martial arts.

IP MAN 4 comes to Ultra HD Blu-ray 4K with High Dynamic Range and a Dolby Atmos audio track. The film looks sharp and vivid with the HDR in 4K. In addition the Atmos track handles the film quite well given the fight scenes and usage of the immersive sound.

IP MAN 4 comes to UHD with the bonus’ of English audio, English subtitles, Featurettes, and trailers.