War of the Worlds is a 2005 American science fiction action film directed by Steven Spielberg and written by Josh Friedman and David Koepp, loosely based on the 1898 similarly-titled novel by H. G. Wells and jointly produced and released by Paramount Pictures and DreamWorks Pictures. It stars Tom Cruise with Dakota Fanning, Justin Chatwin, Miranda Otto, and Tim Robbins in supporting roles.

Purchase WAR OF THE WORLDS on 4K Blu-ray Today! 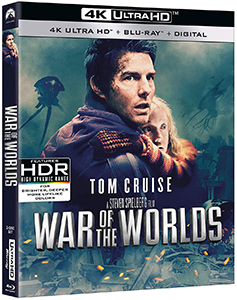 Dockworker Ray Ferrier (Tom Cruise) struggles to build a positive relationship with his two children, Rachel (Dakota Fanning) and Robbie (Justin Chatwin). When his ex-wife, Mary Ann (Miranda Otto), drops them off at Ferrier’s house, it seems as though it will be just another tension-filled weekend. However, when electromagnetic pulses of lightning strike the area, the strange event turns out to be the beginning of an alien invasion, and Ferrier must now protect his children as they seek refuge.

WAR OF THE WORLDS comes to Ultra HD Blu-ray 4K with Dolby Vision HDR and Dolby Atmos. Spielberg in 4K in a sci fi action drama with Dolby Atmos? Yes please! Crank this one up and enjoy the ride!

Revisiting the Invasion
The H.G. Wells Legacy
Steven Spielberg and the Original War of the Worlds
Characters: The Family Unit
Previsualization
Production Diaries
Designing the Enemy: Tripods and Aliens
Scoring War of the Worlds
We Are Not Alone
Galleries
Theatrical trailer

The film was shot in 73 days, using five different sound stages as well as locations in California, Connecticut, New Jersey, New York, and Virginia. The film was surrounded by a secrecy campaign so few details would be leaked before its release. Tie-in promotions were made with several companies, including Hitachi. – wikipedia