Plot: Waking up from a car accident, a young woman finds herself in the basement of a man who says he's saved her life from a chemical attack that has left the outside uninhabitable.[/MOVIE1][POSTER1]

Waking up from a car accident, a young woman finds herself in the basement of a man who says he's saved her life from a chemical attack that has left the outside uninhabitable.
Click to expand...

In 2014, news broke that filmmaker Dan Trachtenberg—who helmed the short filmPortal: No Escape—would be directing a post-apocalyptic thriller called Valencia(also referred to as The Cellar) for Bad Robot and Paramount Insurge, produced byJ.J. Abrams. While it’s true that the film is a post-apocalyptic thriller and was produced by Abrams, it appears that the Star Wars: The Force Awakens director has pulled another fast one on us—the movie’s actual title is 10 Cloverfield Lane.

Yes indeed, it appears as though that long-talked-about sequel to the secretive Abrams-produced 2008 film Cloverfield is not only happening, it’s already in the can. Abrams is taking the exact same marketing approach to this film as he did withCloverfield, as a Collider reader who caught an east coast screening of Paramount’s13 Hours hipped us to the news that the teaser trailer for 10 Cloverfield Lane is attached to Michael Bay’s Benghazi film. Surprise!

We subsequently reached out to Paramount Pictures for comment, who provided Collider with this exclusive statement from J.J. Abrams himself:

The idea came up a long time ago during production. We wanted to make it a blood relative of Cloverfield. The idea was developed over time. We wanted to hold back the title for as long as possible.
Click to expand...

The film stars John Goodman, Mary Elizabeth Winstead, and John Gallagher, Jr. and when we previously spoke with Winstead while she was promoting her indie Faults, she told us the story revolves around a woman who wakes up in a cellar where she’s being kept by a stranger, played by Goodman. The actress previously elaborated a bit on the plot by saying the following:

He tells me that basically the world is over outside because there’s been a nuclear fall-out. It does have similarity to Faults, in some ways, because you don’t know who’s telling the truth or who to believe. There’s a lot of, who’s manipulating who, and all of that. Tonally, it’s very different, but it has some of those same themes.
Click to expand...

Now that we know the title of the film, this “post-apocalyptic” setting appears to make much more sense, but how exactly it ties to Cloverfield remains unknown. Abrams tells us it’s a “blood relative”, which seems to suggest that the movie isn’t a direct sequel to Cloverfield but instead takes place within the same universe. Clearly it’s not found footage so it’s taking a different visual style than the Matt Reeves-directed original, but is it set within the New York City area? And how long after the events of Cloverfield does it pick up? That’s all unclear, but seeing as how the first trailer is set to arrive imminently, I’m sure we’ll have plenty more questions once that’s officially released.

Luckily, we don’t have to wait long at all to see the film. 10 Cloverfield Lane is set to hit theaters on March 11th.

What do you think, folks? 8 years later, are you still eager for another Cloverfield story? Sound off in the comments below.

That was a nice surprise to wake up to!

kaw said:
Serious!? This is awesome!
Click to expand...

Wanna get all the Vancouver ninjas together and hit up the theatre on March 11th?

It might get taken down soon... or im sure a good quality version of the trailer will be online within the next day or two.

EDIT
Just read the official trailer will be released at midnight.
Reactions: bloodsnake007 and tridon

WHAAAAAAT!!!!
I was not expecting this.
I just nearly woke the whole house up lol

One of my favourites especially for cam.

The trailer is very strange though


Edit: just read the op properly.
Hmmmm sounds strange and it will be weird a cloverfield film not being hand held cam.
Also not sure it will work without creatures/ alien but I suppose we will find out soon

Plus that could be a fake trailer for this purpose. Who knows but looking forward to finding out more

Also in the first film the creature fell from space (you see it at the end) so maybe an invasion? That would be cool
Reactions: tridon

It might get taken down soon... or im sure a good quality version of the trailer will be online within the next day or two.

EDIT
Just read the official trailer will be released at midnight.
Click to expand...

I can't believe Cloverfield is back!!! I'm sooo happy right now! Looks like it'll be a slow burn with an intense climax. Can't wait!
Reactions: bloodsnake007 and Flloydo

Where the hell did this one come from? Never heard about them doing a sequel!

Honestly, Cloverfield is still my favourite found footage film. I absolutely loved that one. And the teaser of the sequel looks great, which I really didn't expect right now. I don't even want to see more in another full trailer. The teaser already got me, so I'll definitely check this one out (without seeing too much in several trailers).
Reactions: Flloydo

Oh my god, no more secrets

Wasn't a big fan of the first one, but this looks a lot better... great cast, and Damien Chazelle helped write the screenplay, so I'm definitely in!
Reactions: Flloydo

The poster is here... 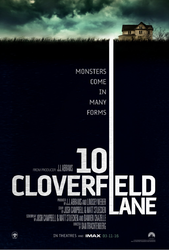 I love when JJ Abrams does this!! I love these Guerilla trailers from nowhere!
This is like old days, like when movies like Star Wars were secretly shooting under assumed titles.
I am old school, and don't like to know everything about a movie before I see it (at least some of the time).
Reminds me of the Brilliant campaign that was the original Cloverfield. (Second only to the Winner and Still Champeen of the "Greatest Movie Marketing Campaign Ever" - The Dark Knight)
I love this!
Reactions: Flloydo

I thought a sequel to Cloverfield this was dead years ago?The trailer doesn't give us much though.I can watch people make sandwiches and break bottle on peoples face anywhere.

Glad to see Elizabeth Winstead working again.It's been too long since she was on my screen.She hasn't aged a day since Sky High.
N

tridon said:
@bloodsnake007 Time to return to the world of Clover... in only 2 months!!!

I can't believe this amazing surprise!