Plot: An American Ambassador is killed during an attack at a U.S. compound in Libya as a security team struggles to make sense out of the chaos.[/MOVIE1][POSTER1] 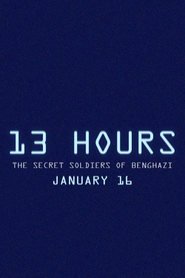 From director Michael Bay, the true Benghazi tale is based on Mitchell Zuckoff’s recently released book, officially described as follows:

“13 Hours” presents, for the first time ever, the true account of the events of September 11, 2012, when terrorists attacked the US State Department Special Mission Compound and a nearby CIA station called the Annex in Benghazi, Libya. A team of six American security operators fought to repel the attackers and protect the Americans stationed there. Those men went beyond the call of duty, performing extraordinary acts of courage and heroism, to avert tragedy on a much larger scale. This is their personal account, never before told, of what happened during the thirteen hours of that now-infamous attack.

The feature film version, from Paramount Pictures, is set to star Pablo Schreiber, John Krasinski, James Badge Dale, David Denman, Max Martini and Dominic Fumusa and will hit the big screen January 15, 2016. Chuck Hogan (The Town) has adapted the screenplay for the project, which is set up at Paramount Pictures with Erwin Stoff producing.

Looks very good actually. I saw the trailer on facebook half an hour ago.

How did I miss this!? (probably because of the very bland title...)

About dang time that Krasinski got an action role!
I remember when he almost got Captain America before Chris Evans did. Yes, that would have been weird... but still I've always thought he deserved a big role like that.

Kind of funny for The Office (US) fans. Both "Jim" and "Roy" are in this movie.

Saw the trailer this week-end at the cinema (before M:I)... and thought it was really bland. Told myself "not another one...".

Who knows, I hope I was wrong and we can have some à la ZDT!

Yep, I think this will be good even in spite of Krasinski. I've liked just about all of Bay's movies so far. 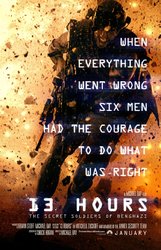 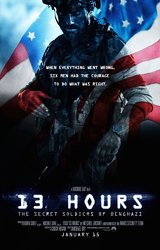 This movie is on my Radar, hopefully i can get to a theater and see it .

I'm surprised Hillary hasn't tried to stop this yet, with all the lies she told being exposed on the big screen.

does anybody know, is this in limited release outside the US?

Here in Canada, I've been trying to find showtimes of it and it seems like only 1 theater in each Major City / Province is getting it.
Very odd, thought this was a wide release...

Really wanted to see it this weekend, but I guess I wont be anymore.

@ash333 From my house, it actually is almost closer then the Vancouver theater showing it! haha
Too bad the dollar is so bad... doesn't make much sense.

I don't see why it would be a limited release.it's one of the biggest movies to start the year.
Reactions: bloodsnake007 and ash333

@dboy99 Its wide in the states. Thats for sure. But for some reason not many theaters are playing it here in Canada. It's odd. I can't figure it out.

kaw said:
does anybody know, is this in limited release outside the US?

Here in Canada, I've been trying to find showtimes of it and it seems like only 1 theater in each Major City / Province is getting it.
Very odd, thought this was a wide release...

Really wanted to see it this weekend, but I guess I wont be anymore.
Click to expand...