This is not a confirmed release as of yet as I've Entertainment are gauging interest first.

You'll see from the below screen shot - from their FB page here - that they're asking whether collectors would like to see the below artwork as a full slip only or as a SteelBook too, in which case the SteelBook would be released in Japan. If the SteelBook release doesn't happen, then this thread will be merged with the existing slipcover thread here.

A poll has been added to this thread and feel free to let I've Entertainment know your preference as well. The results of this poll will be shared with I've later. I've never really liked the airbrush style on his face in this art
Reactions: RMA and kitsune

davhyl said:
I've never really liked the airbrush style on his face in this art
Click to expand...

I feel the same, doesn't look right imo and I can't put my finger on why
Reactions: davhyl

"I have Entertainment"? what a name, deserves my "BODN" award, or "Best Original Distributor Name" xD
Reactions: apsmith21 and DMD4k

I was going to wait for a price drop on the 4K slip version with the same art, but would obviously much prefer it on a steelbook! I like the design, but agree his face looks a little off. I'd rather they switched the art around so the back is the front and the front is the back though (same as the 4K slip).

I actually made a custom Funko Pop based on his clothing from that back image...

I'd like to see the amaray art used here on one of the slips if possible too... 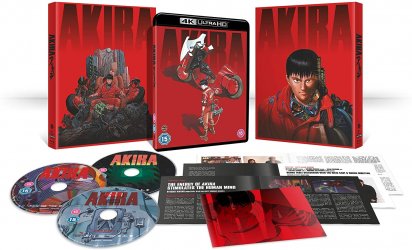 blucrazy2 said:
"I have Entertainment"? what a name, deserves my "BODN" award, or "Best Original Distributor Name" xD
Click to expand... H I L A R I O U S XD
Reactions: DMD4k and goufcustom

We already have enough steelbook for this movie. How about releasing a premium edition for Steam Boy?
Reactions: steelmybeatingheart

The I’ve steelbook is steelbook of the year for me and their lenti is flawless. Amazing package. Why ruin that with ANOTHER release!

And Also don’t like that airbrushed art
Reactions: MajimaGoro and DMD4k

MajimaGoro said:
We already have enough steelbook for this movie. How about releasing a premium edition for Steam Boy?
Click to expand...

MajimaGoro said:
How about releasing a premium edition for Steam Boy?
Click to expand...

I love you just for even saying saying that
Reactions: MajimaGoro

Wait. This is not the same as the Akita steelbook which i’ve entertainment release previously right but with 4K this time?

And how come a Korean company releasing in Japan?

Well, I'm always down with some new akira steelbooks. Unfortunately with this title the arts are always those 4 or 5 you see around all the time, but at least you can play with them to get a fresh visual look, like kimchidvd has done recently. But this art for I've entertainment is meh

What is a stillbook and when can I buy a notbook? Not to be confused with a notebook.

I agree with flipping the artwork because that front is so fugly!

That front just looks like fan art to me. Seems a strange choice. Confirmed. Release will be towards the end of June. Blu-ray SteelBook Today at 9:32 AM
Noodles

Blu-ray SteelBook Friday at 7:17 AM
ethnosax