Horror-Theatrical Alien: Covenant - In theaters May 19, 2017

Plot: Ridley Scott returns to the universe he created in ALIEN with ALIEN: COVENANT, the second chapter in a prequel trilogy that began with PROMETHEUS — and connects directly to Scott’s 1979 seminal work of science fiction. Bound for a remote planet on the far side of the galaxy, the crew of the colony ship Covenant discovers what they think is an uncharted paradise, but is actually a dark, dangerous world — whose sole inhabitant is the “synthetic” David (Michael Fassbender), survivor of the doomed Prometheus expedition.[/MOVIE1][POSTER1] 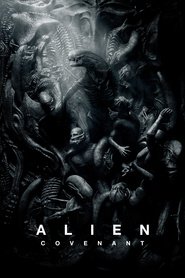 During a press panel for The Counselor, director Ridley Scott was asked about the current state of Prometheus 2 (Paradise), which has been in development hell since the departure of screenwriter Damon Lindelof.

Good news for fans of the quasi-Alien prequel (that’s me!), he confirms that the screenplay is still being written. Transcendence scribe Jack Paglen was hired back in June to figure out a way to continue the story of Elizabeth Shaw (Noomi Rapace) and the Engineers, which was left in a state of flux when the original one-shot was changed to make way for a trilogy.
Click to expand...

They should have already been shooting this film.I wonder what's taken them so long to get going ?
Reactions: bluray hunter

I enjoyed Prometheus but I felt a lot was still open to make the link with Alien so I truly hope they'll lean this in the right direction...

And... Noomi rapace was pure eye candy so... Bring HER on!

Can't wait.. The original was insane in IMAX

Drum18 said:
I enjoyed Prometheus but I felt a lot was still open to make the link with Alien so I truly hope they'll lean this in the right direction...

And... Noomi rapace was pure eye candy so... Bring HER on!

Hell Yeah! Bring on the sequel! Thanks for posting this Vlad

Thanks for the info

Chandler_90 said:
Can't wait.. The original was insane in IMAX

Yes it was. Saw it in IMAX 3D and that movie was the primary reason why I bought a 3D capable projector last summer...

Oh yeah! I think part of the negative press this movie got was that many peeps jumped right into it expecting Alien. I can't wait for what's to come though!
Reactions: AnubisNefer

We all knew it was coming!!!!!!!!!!!! Its about DAMN time! I bet Digitalbabe will be thrilled to know this! On the heels of last week's announcement that 20th Century Fox has set a mystery Ridley Scott film for March 4, 2016 comes confirmation, via The Wrap, that the project in question is a sequel to 2012's Prometheus (and a prequel to the rest of the Alien franchise).

The outlet also reports that Green Lantern scribe Michael Green, who has been working with Scott on the proposed Blade Runner sequel, will rewrite Prometheus 2 and that the script calls for multiple versions of David, the synthetic played by Michael Fassbender in the first film, which also starred Noomi Rapace, Guy Pearce, Idris Elba, Logan Marshall-Green and Charlize Theron.

Transcendence screenwriter Jack Paglen provided the original draft of the tentatively-titled Prometheus 2, which is expected to enter production this fall.
Click to expand...

I just read this! I'm so psyched that this is getting a sequel. I think I was one of the few that actually enjoyed it.

tridon said:
I just read this! I'm so psyched that this is getting a sequel. I think I was one of the few that actually enjoyed it.
Click to expand...

I enjoyed it too... BUT... there was SOOO much potential... and SOOO much more they could have given us...

Yup, looking forward to this. And Blade Runner 2!

To tell you the truth, i am more excited for this

rather than the sequel of Blade Runner

Drum18 said:
I enjoyed it too... BUT... there was SOOO much potential... and SOOO much more they could have given us...

So much this Prometheus was a good film but it could've been great.

I'm curious to see the direction of the sequel. I liked the first movie.


Sent from my iPhone using Tapatalk

I just pooped myself. I personaly LOVED Prometheus. Breathtaking take on David. The interactions between human and synthetic.

The synthetic having more humanity than the humans. Should be interesting now his will is his choices should be his own.

As for Blade Runner a sequel a huge ? for me . Now I am hideing in a dark room. Watched it a few times but the conection has never been that strong . Maybe because the book was better I dont know.

Michael Fassbender revealed in an interview with Collider in which he promoted his latest 'X-men' film, that not only is Prometheus 2 happening, he is excited to be back as David and that he is excited to be working with Ridley Scott again:
"For sure, I love Ridley. He's a master filmmaker,"

Fans are wondering what will happen in the next story, with archeologist Elizabeth Shaw played by Noomi Rapace, and damaged, yet still functioning android David played by Michael Fassbender as they were last seen heading to the home world of humanity's architects turned future destroyers, the Engineers.

Breathecast reported that the Prometheus 2 release date was originally set for a 2015 release but was pushed back to 2016 after screenwriter Damon Lindelof left the project to work on Brad Bird's sci-fi project 'Tomorrowland as Ridley Scott worked on the crime thriller 'The Counselor' and the Moses epic 'Exodus', which is set to arrive in theaters at the end of this year.

But it should be noted that Ridley Scott is still onboard to direct Prometheus 2. Lindelof was replaced by Jake Paglen, whose works include the upcoming 'Transcendence'. According to the latest report from The Wrap, Paglen's script draft for the sequel is now being revised by Michael Green, who collaborated with Scott on a planned 'Blade Runner' prequel.

And as the Movie News Hound has reported, 20th Century Fox has set the Prometheus 2 release date on June 2016!
Click to expand...

excellent news. prometheus was not without flaws but the it was very interesting. looking forward to see how story continues ...
Show hidden low quality content

Horror-Theatrical The Vault - In theaters September 1, 2017