Plot: The film will focus on the career of Tupac Shakur all the way to the fatal drive-by shooting in Las Vegas in 1996.[/MOVIE1][POSTER1] 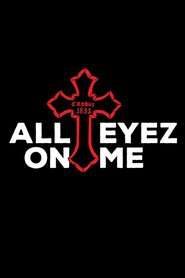 Tupac Shakur Biopic ‘All Eyez on Me’ finds its 2pac! Morgan Creek has spent the past several years developing a Tupac Shakur biopic, without a lot to show for it. But nothing sparks creative progress like a looming deadline, and so with the clock running out on the music rights, the project is finally making some big strides.

Earlier this month All Eyez on Me found a new director in Benny Boom, and now it’s found a new lead as well, in relative newcomer Demetrius Shipp Jr. In addition, Jamal Woolard has been set to play the Notorious B.I.G. Get more details on the Tupac Shakur biopic casting, and see the first photos of Shipp on set, after the jump.

Shipp himself announced his Tupac Shakur biopic casting on Twitter (via Variety). Shipp’s only IMDb credit to date is an as-yet-unreleased TV movie titled #unlock’d, so it’s hard to guess how he’ll fare as the iconic rapper. Which could ultimately work to his advantage, since it means Shipp won’t come with the baggage a more recognizable actor might. Shipp is also uniquely qualified for the role in one really obvious way: he bears a striking natural resemblance to Shakur.
Click to expand...

2pac biopic in the works!

The actor chosen to portray him looks just like him! I've heard about this for some time know, glad they are finally taking this forward thanks for the tag my friend @bloodsnake007.
Reactions: chunk and bloodsnake007

@harry @chunk @Mickle_89 any interest in this my Ninja friends.
Reactions: chunk, bloodsnake007, Mickle_89 and 1 other person

2pac biopic in the works!

The actor chosen to portray him looks just like him!

SK 80 said:
@harry @chunk @Mickle_89 any interest in this my Ninja friends.
Click to expand...

Boy, Hollywood is really scraping the bottom of the barrel now
Reactions: C.C. 95

Ricker said:
Boy, Hollywood is really scraping the bottom of the barrel now
Click to expand...

They have to cash in on the success of Straight Outta Compton.
Reactions: C.C. 95, Drum18 and bloodsnake007
N

Ricker said:
Boy, Hollywood is really scraping the bottom of the barrel now
Click to expand...


dboy99 said:
They have to cash in on the success of Straight Outta Compton.
Click to expand...

Title: All Eyez On Me

Her role is described:

"The Walking Dead‘s Lauren Cohan has joined the cast of the Tupac Shakur biopic All Eyez On Me where she will play Leila Steinberg, a key figure in the young rapper’s life. Steinberg was only 25 years old when she met the 17 year-old rapper Shakur who came to one of her workshops where she mentors kids to use their talent to make their lives better. She knew instantly that he was a different kind of talent and started working with him."
Click to expand...

Awesome news! I remember reading something about an upcoming film for years, and also that Antoine Fuqua (Training Day) was supposed to shoot this film, too bad he can´t now, he has more experience than Benny Boom. I do really hope he doesn´t mess this up, ending like a Mtv video clip
Reactions: TheCollector86 and bloodsnake007

these joined also the cast: two dr. dre's. one from straight outta compton on from all eyez on me.
Reactions: laz305

More info on cast:
Dominic L. Santana will play Suge Knight
Danai Gurira as Afeni Shakur
Kat Graham is taking on the role of Jada Pinkett-Smith
James Hector is Mutulu Shakur, ‘Pac’s stepfather
Jamal Woolard will reprise is role as the Notorious B.I.G. in the biopic. Woolard play Biggie in the 2009 biopic Notorious.

Hope this is good!
Reactions: steelbookz4eva, mascott, luke98 and 3 others

ALL EYEZ ON ME.
Grammar and spelling continues to be a huge problem in the Rap world. Please give.
Show hidden low quality content