In addition to a newly-remastered Blu-ray presentation of Batman Beyond: Return of the Joker, there are 15 featurettes on the bonus discs, highlighted by two new inside looks at the beloved television series, led by Nostalgic Tomorrow, a gathering of Batman Beyond production talent and cast led by executive producer Bruce Timm and actors Kevin Conroy and Will Friedle, the voices of Batman and Terry McGinnis, respectively. The bonus discs also spotlight four episodes with audio commentary from Timm and select members of the production team.

Collectibles within the stunning packaging include an exclusive chrome Batman Beyond Funko POP, and four beautifully-designed lenticular art cards produced especially for Batman Beyond: The Complete Animated Series Limited Edition. This ultimate collectors Blu-ray box set will be individually numbered for a Limited Edition release of 50,000. 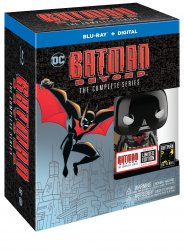 From the internet...
Batman Beyond: The Complete Animated Series Limited Edition will arrive on digital on October 15 and Blu-Ray on October 29.

'Of the 52 Beyond episodes, 41 have been fully remastered from the original 35mm film, removing film grain for better color, removing dust and dirt and enhancing the resolution.

The 11 other episodes have been damaged over time, meaning they have been 'Smart Rezzed', resulting in a better image than the original, but not as advanced as the fully remastered episodes. Those 11 episodes are: “Eyewitness,” “Final Cut,” “The Last Resort,” “Armory,” “Sneak Peek,” “The Eggbaby,” “Zeta,” “Plague,” “April Moon,” “Sentries of the Lost Cosmos” and “Speak No Evil.” '

Great to see them releasing this in a package that is not too unsimilar to the TAS release last year. Instant pre-order.

Pretty much the only Batman series I haven't seen. Looking forward to picking this up.

Why can't they just make a higher priced edition with a proper unique statue in rather then a funko :/