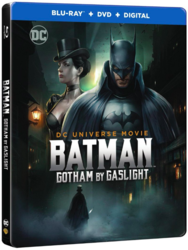 fingers crossed dc will be back at there best as it feels like ages since they have done a good animated movie,
Reactions: velocirafa
V

Maybe get into the Victorian mood by watching GASLIGHT beforehand - Charles Boyer & Ingrid Bergman (1944) / Anton Walbrook & Diana Wynyard (1940) - both versions well worth a watch as is FANNY BY GASLIGHT (no sniggering at the back) and some period Holmes . . . This is "R" rated though . . .

Charming animation . . . although very different in style to that of the graphic novel:- Who's doing the voices:- Anyway, cool visual well set out on the front (unlike the recent TWO-FACE) . . . although would have preferred something more interesting for the steelbook itself such as this Mike Mignola illustration from the 1989 graphic novel (even though the animation style of the film bears little relation to the comic) leaving the one in the OP to the plastic cased edition:- 1) What's on the release horizon after GOTHAM BY GASLIGHT ?
2) Bruce Timm on the film
3) Trailer

Just hope it’s an improvement over the more recent DCAU films, I didn’t think it could worse than the killing joke, then I saw Batman and Harley Quinn SMH.
Loved the original graphic novel so keeping my fingers crossed.

Hopefully this will be available through Zavvi. If it isn't, do you plan on doing a GB @apsmith21 ?

It's available for pre-order now online. No store pick-up. Shipping only.

mgoode20061 said:
It's available for pre-order now online. No store pick-up. Shipping only.
Click to expand...

I know you were talking about this a month ago, but it is actually in stores in case anyone is curious.
Reactions: apsmith21

Grabbed a couple of copies from Target.com if anyone needs help
Reactions: Futurhythm and dfoles

Blu-ray SteelBook Monday at 3:23 AM
jaffajakes