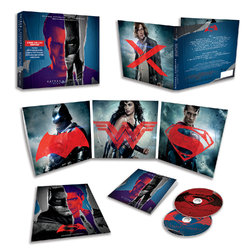 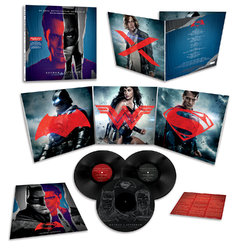 WaterTower Music officially announced today the March 18 release of the Batman v Superman soundtrack! Below, you can check out a spoiler free track listing and even listen to a preview of the new score by Hans Zimmer and Junkie XL (aka Tom Holkenborg).

Released today and mine is arriving tomorrow - can't wait. Already listening all day to the MP3 from Amazon - it is another masterpiece from Zimmer.
Reactions: bloodsnake007

Bought it today along with the man of steel soundtrack for £17.

I got the ps4 dynamic theme for BvS And the theme on it was epic so i had to grab it.

For those waiting or haven't heard about this, Amazon has it now for under $16 - fantastic price for a 2 CD album AND a MP3 RIP for your Amazon Music library!!
Last edited: Mar 20, 2016
Reactions: bloodsnake007

zavvi have got a blue and red vinyl choice. Finally in da house!! Joining its mates after 3 years... Thanks @bloodsnake007 - now I am hoping Target will release a similar metalpak with the BvS logo embossed.
Reactions: bloodsnake007

ash333 said:
Thanks @bloodsnake007 - now I am hoping Target will release a similar metalpak with the BvS logo embossed.
Click to expand...

Can't wait to see this!