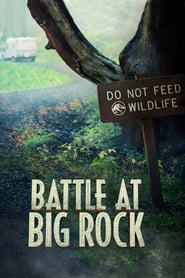 Jurassic World franchise writer and director Colin Trevorrow has announced that the mysterious new Jurassic World short film, Battle At Big Rock, will be premiering on Sunday, September 15, on FX.

Details on the short film are being kept under wraps, but Trevorrow shared that Battle At Big Rock stars André Holland (Moonlight), Natalie Martinez (End of Watch), Melody Hurd (Fatherhood), and Pierson Salvador (NOS4A2). It has not yet been confirmed when the short film takes place, but it will likely serve as a story following Jurassic World: Fallen Kingdom, which ended with dinosaurs once again roaming the earth, and giving fans a tease as we wait for Jurassic World 3 to release in 2021.

The short film was co-written by Trevorrow and Emily Carmichael (Pacific Rim Uprising, The Black Hole), with music by Amie Doherty and Larry Fong serving as the cinematographer.
Click to expand...

Really curious why this is airing on FX?

This was actually a pretty entertaining short.

Was just getting into this thinking it was building up to something epic... then it ended.