You are using an out of date browser. It may not display this or other websites correctly.
You should upgrade or use an alternative browser.
C

I saw this on Amazon.fr does anyone know anything about it.
I may not have put the link in correctly, if a mod could check please
Thanks 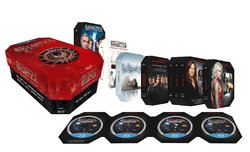 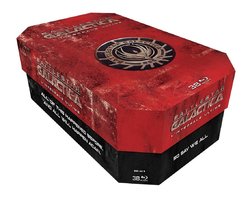 Cymon H said:
I saw this on Amazon.fr does anyone know anything about it.

Does this contain the 1980s series? Yes I know it was crap, but it would be nice for this set to be complete. I'm between this set or the recently released US ultimate set.
Last edited: Jul 21, 2015

sweet jebus i need this!
C

Would be curious to see real pictures of this, just to see what they came up with.

Man this sux, I already have the first edition of the limited edition complete series but this one look way nicer. I really like the contour of the box and the price is way better than the $300 that I paid for the first edition.

I've got it on pre-order and I'm in Ireland so when it arrives on my table, I'll post up details (PAL pitfalls, extras, package shots, aspect ratio of the original series) if you're interested. Chances are it will arrive faster for me than anyone in the states will get it, so. I've a US Samsung blu ray player so I can check for any region code anomalies as well.
C

Amazon.fr have updated the picture of this on their website. Sorry, I don't know how to put the link here perhaps a moderator could help.
Amazon.co.uk are releasing the original 29 disc set that came out last year but at £130.00 this version is much better value

Updated the OP with new image.

This set is looking better and better, Too bad I already have the 1st edition set otherwise I'd buy this one.

Boxset is on its way to me. Should be around the 14th of October so I'll keep an eye on it and let everyone know. Hey, if someone else gets it faster, chime in!

very disappointed by Italy's treatment , no release announced , tons of tv series but this not

The set looks lovely and it is really sturdy. But, I don't know where the hell I'm going to fit the set on a shelf since it's a beast of a set. All the menus on the original sets give you the option of an English menu. Audio is DTS HD 2.0. English subtitles are included. Menus are 16:9 but all original series episodes play in native 4:3.

For obvious reasons I've not looked at the 2000's series sets but I can confirm that the set includes a UV code leaflet. Don't know whether I can redeem the code but I'll try. Pheww, I'm a bit pooped after all that. I've the whole weekend to check this stuff. I promise I'll do the region code stuff on my US player as soon as I can.
Reactions: tonybsg, ty233, galareta2332 and 4 others

Wow thanks for the pics @eeeper this set is waaaay nicer than my first edition set.

AcIDc0r3 said:
Wow thanks for the pics @eeeper this set is waaaay nicer than my first edition set.

Not a bother, Acid. I've been holding off getting Galactica over the years on blu ray with the exception of a S1 HD DVD set of the remake so this was a no brainer. The only thing that I was worried about the aspect on the original series. With that cleared up, happy days are here again!
Reactions: Savage Clown

bit peeved royal mail didn't even attempt to deliver this no card through the door only dispatched 3 or 4 days ago and returned to amazon....not a happy bunny
C

Thebigm76 said:
bit peeved royal mail didn't even attempt to deliver this no card through the door only dispatched 3 or 4 days ago and returned to amazon....not a happy bunny
Click to expand...

Are you sure it was Royal Mail, they usually put a card through and keep items for 18 days before sending back

Cymon H said:
Are you sure it was Royal Mail, they usually put a card through and keep items for 18 days before sending back
Click to expand...