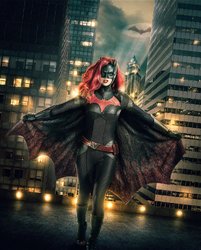 The CW has released a first look photo of Ruby Rose suited up as Batwoman, who will first appear in the annual DC superhero crossover event, titled Elseworlds, as well as the Batwoman series that is currently in development from producer Greg Berlanti.
Click to expand...

This looks like Garbage.And a bad actress to boot.

Teaser from the crossover. Showing Batwoman.

Arrowverse's 'Crisis on Infinite Earths' crossover will include Batwoman, Legends of Tomorrow

“Crisis on Infinite Earths” will truly be the Arrowverse’s biggest crossover yet.

EW has confirmed that the highly anticipated event will include Arrow, The Flash, Supergirl, DC’s Legends of Tomorrow, and Batwoman, the newest Arrowverse series. “Crisis on Infinite Earths” will be five hours long and air over two quarters, the CW announced at its upfront presentation to advertisers in New York Thursday morning.

There have been questions about which shows would be involved in “Crisis” ever since it was announced in December because the most recent crossover, “Elseworlds” only included Arrow, The Flash, and Supergirl, but not DC’s Legends of Tomorrow. Concerns about Legends of Tomorrow‘s inclusion rose after the CW revealed that its fifth season was being held until midseason. Luckily, it seems as though that isn’t stopping Sara (Caity Lotz) and the rest of the gang from joining the crossover fun. Given the fact that “Crisis on Infinite Earths” shares its name with one of DC Comics’ biggest stories, it’s not entirely surprising that Greg Berlanti and company are making sure all of the Arrowverse’s superheroes are involved.

Even though “Crisis” won’t air until later in the year, the Arrowverse has already started preparing for it. Both The Flash and Arrow‘s most recent season finale set up the event in major ways. The former finale revealed that Grant Gustin’s Barry Allen vanishes in a “crisis” in the year 2019, and the Arrow season 7 finale ended with the Monitor (LaMonica Garrett) recruiting Oliver Queen (Stephen Amell) to save the multiverse from, you guessed it, an impending crisis.

The Flash, Supergirl, Arrow, and Batwoman will air this fall on The CW. 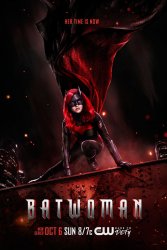