Plot: A drama based on the experiences of Agu, a child soldier fighting in the civil war of an unnamed African country.[/MOVIE1][POSTER1] 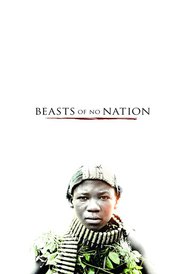 Netflix has revealed the powerful final 'Beasts of No Nation trailer'! Written and directed by Emmy Award winner Cary Fukunaga (“True Detective,” Sin Nombre) and starring Golden Globe winner Idris Elba (“Luther,” Mandela: Long Walk to Freedom), Beasts of No Nation will debut on Friday, October 16, 2015, the same day in Landmark theatres in the U.S. and worldwide on Netflix in all territories where the network is available.


Beasts of No Nation is based on the highly-acclaimed novel by Nigerian author Uzodinma Iweala, bringing to life the gripping tale of Agu, a child soldier torn from his family to fight in the civil war of an African country. Newcomer Abraham Attah gives a stunning portrayal of Agu, while Elba dominates the screen in the role of Commandant, a warlord who takes in Agu and instructs him in the ways of war.
Click to expand...

Will be watching this next week.
Show hidden low quality content