Looks like the Breaking Bad fanatics don't have to be so sad anymore.

Breaking Bad‘s Saul Goodman will live on at AMC. After lengthy negotiations, the cable network and Breaking Bad producer Sony Pictures TV have reached a licensing agreement for a spinoff from Vince Gilligan‘s acclaimed drama series. The spinoff series, tentatively titled Better Call Saul, had been in the works for months. It centers on one of Breaking Bad‘s most recognizable supporting characters, Bob Odenkirk‘s unflappable criminal lawyer Saul Goodman.

Conceived by Breaking Bad creator Gilligan and series writer-producer Peter Gould, who created the Saul character together for a Season 2 episode written by Gould, the spinoff will be a one-hour prequel that will focus on the evolution of the Goodman character before he ever became Walter White’s lawyer, AMC said. The network wouldn’t elaborate on the project’s status, but I’ve learned Better Call Saul has a series order pending the complication of Sony TV’s deals with Gilligan, Gould and Odenkirk. The pact between AMC and Sony TV came after talks between the two sides came down to the wire, with other outlets, including Netflix, which has had huge success with Breaking Bad, very interested in snatching the spinoff series.

The title of the spinoff comes from the original Saul episode of Breaking Bad, titled “Better Call Saul”, in which Walt (Bryan Cranston) and Jesse (Aaron Paul) hire the flamboyant Goodman after Badger (Matt L. Jones) is caught by the DEA. Goodman, who has been a regular presence on the show since, is a sleazy but highly competent criminal lawyer with a penchant for over-the-top TV commercials in which he uses his signature tagline “Better Call Saul!” Saul has served as Breaking Bad‘s comic relief, which is not surprising given Odenkirk’s strong comedy background. While hourlong, the spinoff is expected to be be far less dark than the original series, with more comedy infused into it.

Gilligan has been high on the idea for over a year. “I would love to see a Saul Goodman spinoff,” he said in a July 2012 interview. “I like the idea of a lawyer show in which the main lawyer will do anything it takes to stay out of a court of law. He’ll settle on the courthouse steps, whatever it takes to stay out of the courtroom. That would be fun — I would like that.”
Click to expand...

Last edited by a moderator: Apr 14, 2019
Reactions: Snollygoster, bloodsnake007, spass and 1 other person For the past three years, summer has brought with it the start of a new season of Breaking Bad. That won’t happen in 2014, but something (hopefully) almost as good will. AMC has announced that the spinoff Better Call Saul will premiere in November, though they have not yet set an exact date.
Click to expand... Just how did Saul Goodman hook up with Mike Ehrmantraut before the events of hit AMC series Breaking Bad? It seems we may soon find out. Jonathan Banks, the actor who played Mike during several seasons of the show, has officially been added to the cast of Better Call Saul, the Breaking Bad spin-off co-created and produced by Vince Gilligan. Unlike potential cameos by Breaking Bad stars Aaron Paul or Bryan Cranston, Banks is a series regular.

The Hollywood Reporter broke the news of Banks’ casting. Here’s what Breaking Bad creator Vince Gilligan told the trade about the potential move a few months back:

There’s obviously a danger inherent in doing a spinoff, but I just love the character of Saul Goodman [Bob Odenkirk] so much, and part of me doesn’t want to say no to this world. Personally, I’d have a hard time resisting putting all these guys in for a cameo or two every now and then.

Better Call Saul is still being written but AMC has set a November release window for the show. We’ll know much more as things get closer but the casting of Banks as Mike is a fantastic start. Any question to the timeline of the show can now safely be put to bed.
Click to expand... From AMC and Sony Pictures, "Better Call Saul" focuses on the evolution of the popular Goodman character before he became Walter White's lawyer. Details are few on what overall role Thurber will play, but the outlet notes that the character is "now restricted by an unusual affliction."

McKean is no stranger to working with "Breaking Bad" and "Better Call Saul" creator Vince Gilligan. He guest-starred in a Gilligan-penned two-part episode of "The X-Files" in 1998 and reprised the same role for an episode of Gilligan's spinoff series, "The Lone Gunmen," in 2001.

"Better Call Saul" is expected to begin airing on AMC this November.
Click to expand...

Can't wait for this. Saul was such a great character. Wonder who will broadcast it in the UK, or will it be netflix only?

Better Call Saul to Premiere in 2015, Already Picked Up for a Second Season!

There's good news and bad news today for "Breaking Bad" fans. The bad news first, the upcoming spinoff series, "Better Call Saul" has been delayed. Originally planned to premiere this November, the new show will now air in 2015. The good news, however, is that AMC has already renewed the series for a second season!

You can check out the first behind-the-scenes photo for the series below. From AMC and Sony Pictures, "Better Call Saul" will take place prior to "Breaking Bad" and will feature the return of Bob Odenkirk's Albuquerque lawyer Saul Goodman and Jonathan Banks' Mike Ehrmantraut with a new role for Michael McKean. The first season is slated to run ten episodes with the second planned for 13.

"Production on ‘Better Call Saul’ is underway," says AMC president Charlie Collier, "and we could not be more proud of nor more excited about the work to date. We join the fans in eager anticipation for this series and today we happily confirm that our initial ‘Saul’ order is for two seasons and a total of 23 episodes. When introducing any series, especially one with the DNA of ‘Breaking Bad,’ there are countless factors to consider in making sure the show gets the launch it deserves. We have a strong history with Vince, Peter, Bob, the studio and so many involved with this production; we are enjoying the process on ‘Saul’ and all share a focus on making it a true television event. No half measures.”

AMC has just debuted "Better Call Saul: The Song," presumably the theme song for the upcoming spinoff series that follows Bob Odenkirk's Albuquerque-based lawyer. With lyrics by series creators and writers Vince Gilligan and Peter Gould, "The Song" is performed by Junior Brown.

A New Key Art Poster has been released by AMC! 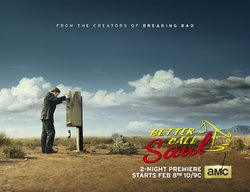 I'm so excited for this show!

I hope this turns out good cuz I can see it going south fast.

I'm losing shows that I enjoy, I definitely need something new quick. Hope this doesn't flop.

AMC has released an Extended Trailer!

any uk release date dont want to download it

@luke98 saying it will be very shortly after it's aired in America and exclusive to Netflix
Reactions: luke98

Due to be aired on Netflix on the 9th of feb
Reactions: lolwut
S