​
Our Star Wars issue of BIRTH. MOVIES. DEATH. magazine was such a hit that we have decided to keep going in that direction - special collector's issues tied in with some of the year's most exciting movies (as well as special issues featuring some of the greatest filmmakers who ever lived). We have an exciting 2016 planned out, and it all starts here: with Batman vs Superman: Dawn of Justice.

Yup, that's our next issue, and the image you see above is the awesome, dynamic wraparound cover created by Oliver Barrett and designed by Mondo that is exclusive to this magazine. Within the pages of the mag you'll find the same great art and smart words you found in the Star Wars issue (except about Batman and Superman and Wonder Woman, duh) - and if you're lucky you'll find a flexi-disc! That's right, we're including a limited edition Mondo flexi-disc featuring a track from the Hans Zimmer/Junkie XL score for Batman v Superman and we're inserting them in random issues.

Inside the magazine you'll find examinations of the history of Batman and Superman, a look at the man who created Wonder Woman and the woman behind him, a dive into Lex Luthor's twisted, wicked backstory, an appreciation of DC's booming TV-verse, and a special, exclusive article from comic book legend Mark Waid reminding us "Why Superman Matters." From an ode toThe Batdance to a look at the original Batman and Superman serials to insight into Batman the Animated Series, this issue has everything you need to get ready for the titanic tussle between DC's most iconic heroes.

This is going to be a highly limited release, and the magazine will only be available for pre-order for the next couple of weeks. You can buy it as part of a ticket package at your local Alamo Drafthouse when you buy your Batman v Superman tickets (also available: ass-kicking pint glasses!) or you can pre-order it online right now. The magazine will be published on March 24th, so that's around when you'll be receiving them.

We have changed up our shipping procedure from Star Wars and we now offer package tracking so that you know just what is happening to your magazine. It's a better system and we think it'll be much smoother.

Order right now using the button below.Expect more peeks inside the magazine in the coming days, but we will be closing orders much quicker than we did with Star Wars, so don't dawdle. Once the orders are closed this magazine is finished, and no further copies will be printed.

Issue cost 6 USD PRE-ORDER HERE at the bottom of the article ...

Just ordered me a copy. Artwork looks amazing and the articles sound interesting. And maybe a Flexi Disc

Damn that I missed out on their SW issue by Matt Taylor in November. Only knew about his print with the art.

BIRTH.MOVIES.DEATH.‘s
Commemorative STAR WARS Double Issue ​
The sense of hope and excitement in the air can only mean one thing: a new Star Wars movie is coming. Each previous trilogy has defined a generation, and to celebrate this next epochal event we present the special double Star Wars collectible issue of Birth.Movies.Death.

Packed with words and art by a diverse group of collaborators, this Star Wars issue celebrates the entire breadth of the Saga, from clones to ewoks and beyond, to the new era beginning this December.

In the pages of this magazine you'll journey with Luke Skywalker, investigate Darth Vader's psychology, tour the universe of Star Wars, experience the rush of collection toys, see exclusive new Marvel Comics art and more.... all in a gorgeous wraparound Mondo cover by Matt Taylor.

We are proud of this issue and believe it marks a new phase forBirth.Movies.Death. Join us as this magazine jumps to hyperspace!

Read more about the issue below:

This December audiences return to a galaxy far, far away with STAR WARS: THE FORCE AWAKENS, and Alamo Drafthouse and BIRTH.MOVIES.DEATH. are commemorating this cinematic event by releasing a double-sized collector’s issue extravaganza! Celebrating almost 40 years of the STAR WARS saga, this 88-page special issue will feature an exclusive Mondo cover by artist Matt Taylor, interior art by renowned designer Chris Bilheimer, a redemption code for a free pack of Topps STAR WARS Card Trader cards and history and appreciation of the films, toys, comics and more that have defined the STAR WARS universe.

Articles from top writers around the galaxy include:

"I Hate You, Darth Vader" by psychologist Andrea Letamendi, Ph.D.
"Han Solo: Cooler Than Carbonite" by GQ writer Marc Bernardin
"A STAR WARS Guide to the Galaxy" by Alamo Drafthouse Dallas/Fort Worth creative manager James Wallace, infographic design by Chris Bilheimer
"A Brief and Slightly Personal History Of The STAR WARS Toys" by Mondo Creative Director of Toys and Collectibles Brock Otterbacher
"True Tales From The 1999 EPISODE I Line" by writer Sarah Sprague, illustrated by THE SABERTOOTH VAMPIRE creator Mike Russell
And many more!
Last edited by a moderator: Aug 16, 2016

Ordered! I want that pint glass if anyone here live near any Alamo Cinema let me know 'cause I live in Puerto Rico and I have no use for the admission ticket.

I got my mag form the Bay with the glass for $30. I'm planning to buy another copy and framing some pages (like the very-expensive Tyler Stout SW's).
Last edited: Feb 27, 2016
Reactions: dan8885

Ordered. I missed out on the Star Wars issue.
Reactions: dan8885 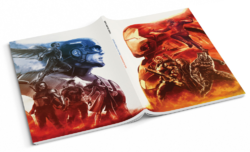 It’s hero against hero as the Marvel Cinematic Universe is split asunder in CAPTAIN AMERICA: CIVIL WAR. But you won’t have to choose sides with BIRTH.MOVIES.DEATH.’s special collector’s issue celebrating Captain America's 75th anniversary, available for pre-order now through our site!

The deluxe-sized magazine, featuring stunning cover art by Chris Skinner, dives deep into the history of Cap, tracing his story from punching out Hitler in WWII to standing toe-to-toe with Iron Man in 2016. But Cap doesn’t stand alone, and so this magazine will also look at some of his greatest allies in the fight against tyranny, including Black Widow, the Falcon and the newest Marvel movie star, The Spectacular Spider-Man!

But wait, there’s more - in honor of the screen debut of The Black Panther we look at the history of black superheroes, we trace the story of Marvel Studios from its underdog beginnings to modern blockbuster dominance and we go behind the scenes of CAPTAIN AMERICA: CIVIL WAR with directors Joe and Anthony Russo. Pre-order your copy right now!

In addition to working with BMD to design covers for the past three issues, we're thrilled to announce that we'll be partnering with them for all future shipping & customer service. BIRTH.MOVIES.DEATH. magazines will still be available through Alamo Drafthouse ticket packages, but all direct online sales will go through us! Click here to pre-order now.

It's a big year for movies which means it's a big year for the BIRTH.MOVIES.DEATH. magazine. The latest in our series of special collectible issues will be released alongside Captain America: Civil War, but you can order the magazine right now and secure yourself a copy!

The mag, with a gorgeous cover by Chris Skinner, will bring you behind the scenes of the making of Civil War, as well as bring you through Captain America's 75 glorious years. Along the way we take stops to look at the history of the Marvel Cinematic Universe, to celebrate the majesty of The Black Panther, to look at the unique relationship between Bucky and Cap, to examine the psychology of Iron Man and much, much more.

This deluxe size issue is perhaps our best yet, and we're incredibly proud of the smart and incisive content, and we're really excited to share with you the interior art (which is still being created!).

This issue also sees us moving magazine sales to what I hope is our final home - the Mondo store. It makes perfect sense that our sibling brand would be hosting sales for this magazine, and they'll be fulfilling orders as well, which means the Mondo quality you expect will extend to this magazine. With Mondo as our final storefront we can begin to look forward to what comes next, including the three other issues we have planned this year and a possible subscription service.

Pre-order your copy today and it will arrive with the film. Click here to purchase for the low, low price of $6 (Captain) American! 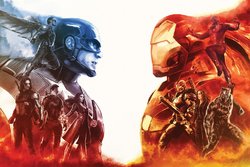 It's a big let down at the moment for me that Mondo will do the customer service and ship them from now on. I paid 10 USD shipping for two issues of Bats vs. Superman directly with Birth.Movies.Death.
Mondo charge me 34,50 USD shipping cost for two issues

I've wrote them a mail and hope they can ship for the same cost like Birth.Movies.Death did before

just order to a USA addy , stock pile , then have it shipped to you. I'm only a click away haha
Reactions: dan8885

Wreck said:
just order to a USA addy , stock pile , then have it shipped to you. I'm only a click away haha
Click to expand...

Thanks John! I'll probably take your offer. But in the end it could have been easier.

They answered me and said they are working on DHL eCommerce for shipping but at the moment USPS is their only partner and that's what they charge.
Maybe with the next issue they offer DHL shipping. Fingers crossed!

Received my order of two copies and they both have the red Flexi-disc. Mondo reduced the shipping cost from 34,50 USD to 12 USD (cost for me to Germany) with switching from USPS to DHL

Thirteen years after Nemo got lost Pixar returns to the oceans for another undersea adventure with FINDING DORY. What better time to look at the vast, cinema-changing history and legacy of Pixar Animation Studios?
An entire generation has come of age with the Pixar universe, and the latest issue of BIRTH.MOVIES.DEATH. magazine brings a smart, appreciative eye to these family films that speak to everyone, from the youngest child to the oldest grandparent.

The issue traces the history of Pixar from a bunch of nerds who believed that computer animation was the future to becoming a bunch of accomplished storytellers who proved it; examines the mature themes of loss in UP; turns attention to the somber warnings of WALL-E; a look at what it's like to grow up with the TOY STORY movies, and it's all wrapped around an extensive, exclusive interview with DORY director Andrew Stanton talking about the history of Pixar and how hard it is to keep that culture alive.

And as an added bonus, we also have a companion sketch book. This blank book includes gorgeous cover art and an inscription from Jay Shaw, MONDO Creative Director. It is the perfect place for aspiring creators of all ages to jot down ideas, sketch out images, and bring their ideas to life.

Supplies are limited and WILL sell out, so get your copy of BIRTH.MOVIES.DEATH.'s Pixar magazine -- including beautiful cover art by Dave Perillo -- today! Click here to pre-order.
@dan8885 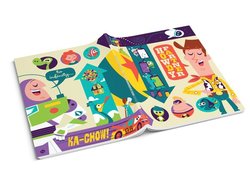 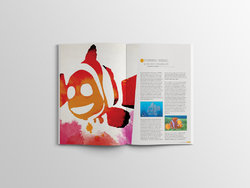 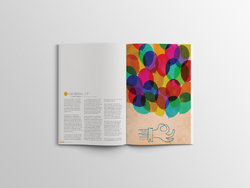 Didn't received the tag @charlie1533pr but thanks a bunch

@Wreck new Birth.Movies.Death for pre-order if you want to continue after Cap vs Iron ..
Reactions: charlie1533pr 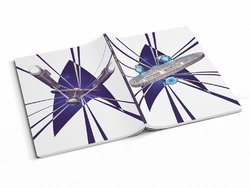 BIRTH.MOVIES.DEATH. boldly goes to the 23rd century with a special, extremely limited full-color issue dedicated to the 50th anniversary of STAR TREK! This magazine is jam-packed with articles and original art celebrating Gene Roddenberry's vision of a better future where the human adventure continues on strange new worlds and with some of the most beloved characters in pop culture history. From the original 1966 TV series to this summer's STAR TREK BEYOND, BMD's TREK issue will appeal to both the hardcore Trekkie and the newcomer to the continuing voyages of the starship Enterprise.

This is a pre-sale. Magazines ship late-July.