Tagline: Whose side are you on?

Plot: Following the events of Age of Ultron, the collective governments of the world pass an act designed to regulate all superhuman activity. This polarizes opinion amongst the Avengers, causing two factions to side with Iron Man or Captain America, which causes an epic battle between former allies[/MOVIE1][POSTER1] 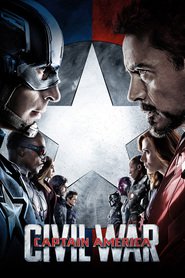 Damn that's on the Fast Track!!!

Until now, the identity of the Marvel film set to open on May 6, 2016, has been kept secret; Marvel Studios and Disney claimed the date first before Warner Bros. slotted the next "Superman" installment for the same weekend.

The mystery has been solved -- the untitled Marvel Studios tentpole that Warner Bros.' Batman-Superman movie will go up against on May 6, 2016, is Captain America 3, sources tell The Hollywood Reporter.

That's the plan, anyway, creating the biggest superhero box office showdown in history (Marvel Studios and parent company Disney staked out the date first). Shooting schedules and post-production could always impact the current blueprint, however. Also, Marvel and Disney have a second untitled movie set to open that summer on July 8, so there is wiggle room.

Marvel films have all but owned the first weekend of summer for the past decade to enormous success, so all of Hollywood was surprised when Warner Bros. announced in January that it would open Batman-Superman movie on May 6, 2016 as well.
Batman-Superman stars Ben Affleck as Batman and Henry Cavill once again as Superman. It was originally supposed to hit theaters in summer 2015, but its release was pushed back nearly a year. There's no doubt but that Warners is hoping to replicate the blockbuster returns Marvel has enjoyed with its multi-hero Avengers universe.
EARLIER: Batman-Superman Movie Bumped to 2016, Setting Up Marvel Showdown
This week, when promoting the upcoming sequel Captain America: The Winter Soldier, Marvel Studios president Kevin Feige threw down the gauntlet, saying he had no plans to move off of the May 6 date. He still wouldn't reveal the identity of the film; however, insiders confirm it will indeed be Captain America 3. The world premiere of Winter Soldier is Thursday in Hollywood.

Warners may have been waiting to see what the Marvel title was before considering a date change for Batman-Superman, if the studio indeed blinks. There are still weekends available that summer, including the first two after Captain America 3 and Batman-Superman are set to open. Zack Snyder begins shooting Batman-Superman in the coming weeks.

Veteran box office observers doubt that the two films will ultimately open opposite each other.

Marvel and Disney are incredibly high on Captain America 2, which opens in north America on April 4 and is garnering huge interest, according to pre-release tracking. They believe Winter Soldier, returning Chris Evans in the title role, will benefit from the same halo effect from The Avengers that Iron Man 3 and sequel Thor: The Dark World enjoyed, as well as firmly establishing Captain America as a standalone franchise.
Brothers Anthony and Joe Russo directed Winter Soldier, and are in talks to return for Captain America 3.

The first Captain America: The First Avenger took in $371 million worldwide, compared to $668 million for Man of Steel. However, Winter Soldier has a shot at matching the $641 million grossed worldwide by fellow Marvel sequel Thor: The Dark World late last year.
Click to expand...

That's insane! Do you think a Captain America 3 release could hold up against Batman vs. Superman? Who is going to budge first in this epic game of box-office chicken?

ha lol at first i thought by the title of your post, that captain was actual going to be IN a movie against batman and superman

I will see Cap, thank you.
B

going to be a good movie

I now have an alternative for batfleck

Either Marvel/Disney or DC/Warner will back down from that date. There's no way they'll sacrifice possibly taking second opening weekend or losing box office cash. My bet is on Batman vs. Superman being moved. Marvel's always opened films in April or May -- that their months. DC flicks usually always open in June (Man of Steel) or July (The Dark Knight). I know they both want to show how big their balls are, but it'd be a stupid business decision to open against each other.
Reactions: Troll2Fan and bloodsnake007

tridon said:
Either Marvel/Disney or DC/Warner will back down from that date. There's no way they'll sacrifice possibly taking second opening weekend or losing box office cash. My bet is on Batman vs. Superman being moved. Marvel's always opened films in April or May -- that their months. DC flicks usually always open in June (Man of Steel) or July (The Dark Knight). I know they both want to show how big their balls are, but it'd be a stupid business decision to open against each other.
Click to expand...

I think you're spot on. I can't see either studio risking losing $50M+ just to face off against one another.

Random thought of the day...this is a mild spoiler, however, as nothing has been confirmed, I would apply it to the "hearsay" column. There's a general consensus that Steve Rogers aka Captain America may in fact die in the 3rd Captain America movie, making room for James "Bucky" Barnes aka the Winter Soldier to take his place as Captain America. Here is my question...the first movie established the fact that Captain America has an as yet undetermined healing factor (undetermined in the sense that we don't know if his healing factor is as acute as the likes of Wolverine & Sabretooth...the only established fact about it is that he can't get drunk), so...if he does have a healing factor, and it is in fact as powerful as Wolverine's...how do they kill him? Just a question to ponder...if anybody has an opinion about it, let me know.

Where's David Copperfield when you need him.

Man, the steel for this could be epic (and i'm looking forward to the movie too)!
Reactions: DADDYCOOL187, kaw, ocielz and 1 other person

The Civil War plot involves the 'Superhuman Registration Act' wherein superheroes must make their identities known to the government (but not the public). Cap and Stark don't see eye to eye on that. Will X-MEN: APOCALYPSE counter with a dose of the 'Mutant Registration Act'? WATCHMEN had to deal with the 'Keene Act'.
A lot of politics going on there! Hope there is room for some Superhero stuff! (-see Star Wars-Episode One on how politics can suck in a fantasy movie... Anyone wanna talk taxation on trade routes in the Galactic Republic?!!

Wasn't Phase 3 meant to be geared towards the Infinity Guantlet? How does brining Civil War into that work?

tommyh84 said:
Wasn't Phase 3 meant to be geared towards the Infinity Guantlet? How does brining Civil War into that work?
Click to expand...

I thought that was in phase 2?The freaking Phases,man.

@dboy99 I think each "Phase" ends with an Avengers Film.
So since Avengers2 is the next marvel film to come out, Phase 2 is complete when it does. Then Phase 3 will start with Antman.

kaw said:
@dboy99 I think each "Phase" ends with an Avengers Film.
So since Avengers2 is the next marvel film to come out, Phase 2 is complete when it does. Then Phase 3 will start with Antman.
Click to expand...

So maybe the tackle both issues in phase three or leave Thanos until after the civil war Phase.

Marvel Studios: The First Ten Years: The Definitive Story Behind the Blockbuster Studio