Plot: While struggling to save her father during a Category 5 hurricane, a young woman finds herself trapped inside a flooding house and fighting for her life against Florida’s most savage and feared predators. 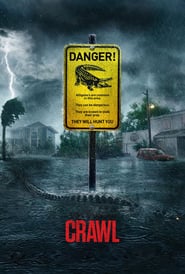 Heute Tension and Hills Have Eyes were good, otherwise Aja's been quite lame IMO. But let's keep fingers crossed.

How did I miss the thread for this!? This looks freaking awesome!!! I enjoyed the film but it fell a little short for me. The graphics and acting were great but the alligators were closer to monsters in there behavior than animals. That’s part of the magic the original Jurassic Park captured that the sequels failed to capture (the lost world did to an extent but I can’t forgire the gymnastics scene). Overall a movie I would buy on blu ray 7.5 of 10.
Reactions: vexred
Movie information in first post provided by The Movie Database
Show hidden low quality content
You must log in or register to reply here.
Share:
Facebook Twitter Reddit Email Link
Top Bottom