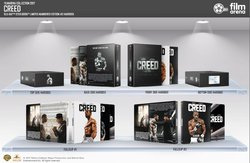 Last edited by a moderator: Apr 7, 2017
Reactions: Josebus, Jedi clare, paulboland and 12 others

Perhaps another potential FAC on the horizon....

Reactions: jammmy, HOBBS, harry and 1 other person
B

Please let it be FAC @carllenc

I know they've been trying for an FAC for this......please let it be!!!
Reactions: jammmy

My FAC collection is expanding fast. Sod the mortgage
Reactions: InAFalsetto and Steelselecta

This out of a lot of other movies getting special treatment lately deserves it.
Reactions: bobberino

If it was up to some collectors every film ever made would be part of the FAC. The reason premium packages are special is because they are not the norm. The same used to be true of barebones Steelbooks until the volume of releases killed a lot of the appeal for collectors. The same thing could happen again if Film Arena aren't careful.
Reactions: bobberino, Hawesy, lgans316 and 11 others

Love this movie. Held off waiting for a price drop on the steel. Please please please be a numbered FAC!
Reactions: harry

Another day, another FAC

Wait has it been confirmed?

FA please remove the text on the back

larson1977 said:
FA please remove the text on the back

I highly doubt FA will get WEA for the steelbook.

Not a lot of WEAs for FACs lately :/

For those who haven't seen the update, this has been confirmed as a FAC edition: Bring on the beauty shots!

HOBBS said:
This out of a lot of other movies getting special treatment lately deserves it.
Click to expand...

Agree, I will be waiting for this and 'Straight Outta Compton'...PLEEEASE FAC

I`m not looking forward to In the Heart of the Sea FAC, the Movie is not very good and the Special Effects are just ugly. But after that Creed and BvS that is terrific

I agree with snooloui. FAC better watch out or they are going to be in a world of hurt.
Reactions: lgans316 and snooloui
Show hidden low quality content