Before the Comic-Con panel, Shudder has released the first Creepshow trailer for executive producer Greg Nicotero’s upcoming horror anthology series, which you can check out in the player below! The series premieres on September 26.

The 12 segments will be based on stories written by acclaimed horror writers and directors consists of: Shudder’s A Creepshow Animated Special is now streaming exclusively on the horror streaming service in all its territories, as well as via the Shudder offering within the AMC+ bundle. The special features two stories directed by Creepshow showrunner Greg Nicotero, with animation by Octopie animation studio and stars Kiefer Sutherland (24, Designated Survivor) and Joey King (The Kissing Booth, The Act).

“Survivor Type,” based on the short story by Stephen King and adapted by Nicotero, stars Kiefer Sutherland (24, Designated Survivor) as a man determined to stay alive alone on a deserted island no matter what the cost.

“Twittering from the Circus of the Dead,” based on the short story by Joe Hill and adapted by Melanie Dale, stars Joey King (The Kissing Booth, The Act) as a teen whose family road trip includes a visit to the gravest show on earth.

Shudder, AMC Networks’ premium streaming service for horror, thriller and the supernatural, today announced A Creepshow Holiday Special set to premiere December 18 exclusively on the horror streaming service in all its territories, as well as via the Shudder offering within the AMC+ bundle.

In the holiday themed, hour-long episode, “Shapeshifters Anonymous,” fearing he is a murderer, an anxious man searches for answers for his "unique condition" from an unusual support group. Starring Anna Camp (Pitch Perfect) and Adam Pally (The Mindy Project), the special is written and directed by Creepshow showrunner Greg Nicotero, based on a short story by J.A. Konrath (Last Call).

“The Spirit of Christmas is alive and well in true Creepshow fashion,” said Nicotero. “Reimagining how we look at the holidays and Santa Claus with an outrageous ensemble cast, a myriad of creepy crawlies and a few thrills and chills shouldn't be missed.”

“This year has been Shudder’s biggest and best yet, and we wanted to thank our million-plus members with one last surprise. Greg Nicotero gift-wrapped the perfect present, an irreverent Christmas-themed Creepshow packed with humor, heart and gore galore,” said Craig Engler, Shudder’s General Manager.

Creepshow, Shudder’s record-breaking anthology series based on George A. Romero’s iconic 1982 movie, is set to return for a second season in 2021. 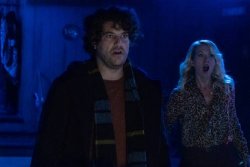