In the spirit of all iterations of Creepshow in pop culture, each issue of the Creepshow comic anthology series comes packed with two spine-chilling stories, and this first look showcases both truly terrifying tales.

David Lapham and Maria Lapham (Stray Bullets) kick off the issue with the terrifying tale of a tree whose roots grew so deep they reached Hell...and the girl who sat beneath it. Trish Mulvihill (Batman, 100 Bullets) colors the story, and Pat Brosseau (I HATE THIS PLACE) letters.

Then, writer Steve Foxe (Razorblades: The Horror Magazine) joins forces with artist Erica Henderson (Assassin Nation, Dracula, Motherf**ker) to share the shocking story of legendary comic creator Sal Medina—and the dedicated fan who went too far. Henderson is additionally on duty for colors, and Brosseau is back for letters on this story as well.

In addition to the main cover by Chris Burnham, Creepshow #2 comes with a striking lineup of variant covers, including a cover by Sebastian Fiumara (Lucifer, Abe Sapien) and a 1:10 incentive cover by Vance Kelly.

The Creepshow comic miniseries deal was brokered by Striker Entertainment.

Creepshow #2 (of 5) will be available at comic book shops and digital platforms including Amazon Kindle, Apple Books, comiXology, and Google Play on Wednesday, October 26, 2022. 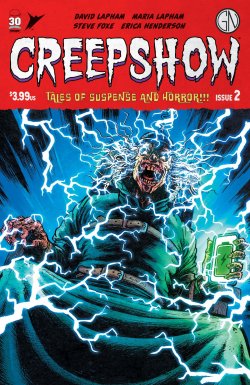 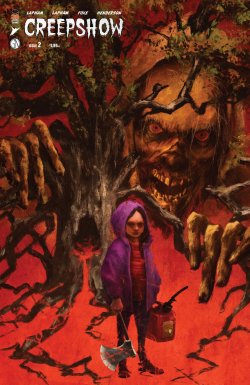 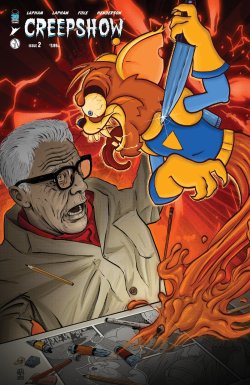 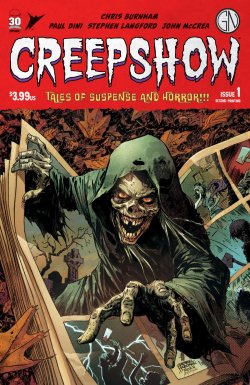 Skybound announced today that Creepshow #1, the debut issue of the five-issue comic book anthology, sold out the same day it hit comic shops. Based on Greg Nicotero’s hit Shudder TV series produced and licensed by Cartel Entertainment, Creepshow #1 will return with a second printing on October 26, 2022 just in time for Halloween.

"There's clearly an insatiable appetite for the unique thrills and chills that Creepshow has to offer, and we’re just getting started!” said Alex Antone, Editorial Director at Skybound. “Look for even bigger scares in our second issue next month, and in the meantime, we hope you enjoy this second printing cover by the indomitable Gabriel Hardman!”

Featuring a brand-new second printing variant cover drawn by Gabriel Hardman (Hulk, Planet of the Apes) and colored by Brad Anderson, Creepshow #1 includes two terrifying tales. Writer/artist Chris Burnham (Die! Die! Die!) scares up a story of trick or treaters who are taught what happens when you mess with the wrong house, and then writers Paul Dini (Batman: The Animated Series) and Stephen Langford (Creepshow TV series) team up with artist John McCrea (Hitman) to petrify readers with the party antics of Shingo, the birthday clown with an appetite for more than cake. Brian Witten is overseeing on behalf of Nicotero’s Monster Agency Productions.