Plot: The evil exploits of Cruella de Vil, the villain from 101 Dalmatians.

Love the sound of this, keep the live actions coming

Didn't know Stone had been officially cast... I'm in! Emma Thompson is in early talks to star opposite Emma Stone in the Disney’s “Cruella,” a live-action origin story based on the classic “101 Dalmatians” villain Cruella de Vil.

De Vil, who will be played by Stone in the new pic, is the villain who was obsessed with capturing the puppies in the 1961 animated classic “101 Dalmatians.” Glenn Close played the baddie in the 1996 live-action film produced by John Hughes, in which her character was also the head of a fashion house.

It’s currently unknown where this movie will pick up in de Vil’s timeline, as is the role Thompson would be playing.

Tony McNamara penned the most recent version of the script with Dana Fox writing a previous draft. Disney recently announced the film would be released on Dec. 23, 2020, signaling the project’s pre-production.

This wouldn’t be the first time that Thompson’s taken a role in one of Disney’s live-action adaptations. She previously played Mrs. Potts in 2017 box office smash “Beauty and the Beast,” and also played “Mary Poppins” author P.L. Travers in “Saving Mr. Banks” alongside Tom Hanks.

Thompson has a busy summer ahead of her with Amazon Studios comedy “Late Night” and “Men in Black: International,” both of which bow on June 7. She is repped by CAA and Hamilton Hodell.

Looks much better than I was expecting. Definitely going to check it out.

This looks fantastic. All over it

Stones hair and costume is on point
Reactions: Drum18

Glad she seems to be actually evil as opposed to what they did with Maleficent.
Reactions: Flloydo and Billy Talent

Looking forward to this

3Maters said:
Glad she seems to be actually evil as opposed to what they did with Maleficent.
Click to expand...

I didn't get evil vibes from her in that trailer at all unfortunately, more Harley Quinn kinda messed up in the head vibes

Still looking forward to seeing more from this though

tommyh84 said:
I didn't get evil vibes from her in that trailer at all unfortunately, more Harley Quinn kinda messed up in the head vibes

Still looking forward to seeing more from this though
Click to expand...

Def Harley vibes. Still more "evil" and closer to the cartoon then Jolie in Maleficent...clearly I am still bitter about them turning the darkest, baddest Disney villain into a softie haha
T 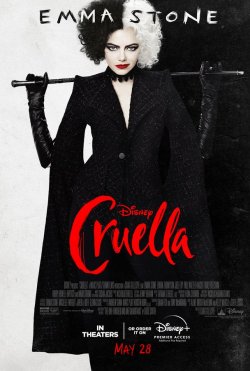