Plot: The film is rumored to involve another popular group in the X-Men mythos, X-Force.

Sequel showed that Deadpool needs people to annoy and bounce off.
It better be just a branding thing and still follow from DP2, retaining all character doing that walk away scene at the end.

maybe we will see Mickey Mouse and friends in this movie

TheCollector86 said:
maybe we will see Mickey Mouse and friends in this movie 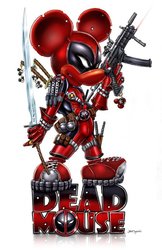 Wild rumors that it will be a reboot (Because of the merger perhaps?)

But that makes no sense with the acquisition ...

This year was the first I'd heard of it too tbh lol.

Noodles said:
This year was the first I'd heard of it too tbh lol.
Click to expand...

phew
thought I was about to have my geek membership revoked

yeslek said:
phew
thought I was about to have my geek membership revoked

At least I'll be right there beside you if it happens lol.
Reactions: yeslek

Marvel is Exploring Ways of Introducing Deadpool Into the MCU It’s been a little while since I’ve been able to bring you a real big rumor, but this something I couldn’t just sit on because it has ramifications beyond just the character it’s about.

According to a most-reliable source who has delivered 100% for me in the past, Marvel is currently considering different options to introduce Deadpool into the Marvel Cinematic Universe. There are three being floated right now, and two of them are pretty interesting.

These are apparently the options on the table that they are considering to bring Wade Wilson into the MCU:

A Disney+ limited series sticks out, as everything on that service is meant to be family-friendly; or PG-13 at most in the cast of the Marvel Studios stuff. Deadpool can work in a PG-13 environment (the comics mostly are), so that’s definitely an interesting choice to consider in bringing him to the MCU. A limited-series could have all sorts of fun references to the past of the MCU while they integrate him to the universe.

The third option is the most interesting. That Marvel is considering an option of putting Deadpool in Spider-Man 3 is a huge confirmation that Tom Holland really does have a contract for three solo movies with Marvel, like he has said in the past, and that the Marvel-Sony deal will continue as normal into a third movie following Spider-Man: Far From Home.

It’s also not that shocking, as Marvel Comics published a Spider-Man/Deadpool on-going comic and it was pretty popular. The two characters bounce off each other very well, and that would translate great on the big screen with Ryan Reynolds and Tom Holland; if that third option ends being the one they go with.

Obviously there are going to be people mad if they introduce him to the MCU in a PG-13 way, which is what the limited series or Spider-Man 3would have to be, but as they’re looking at these various options it means that bringing Wade Wilson into the MCU seems to be something of a priority at the moment. Personally I really like the Disney+ limited series idea, six hours of Deadpool is plenty of time to integrate him into the rich MCU history, but the idea of him popping in Spider-Man 3 is also very exciting.

As of right now it’s just a rumor, but hopefully we’ll hear more about the Merc With the Mouth interacting with MCU characters in the near future.

Am down for introducing him in a 3rd Spidey movie but then the 15 cert/R rated solo Deadpool going forward just to keep that tone and prior Deadpool movies in tact.

Sure, tone him down when interacting with the non-fox based characters of the MCU but they need to keep a more adult version too IMO

Deadpool Is Going To Stay R-Rated Under Disney Deadpool Is Going To Stay R-Rated Under Disney

That's an old article. I hope Deadpool is R rated and better than Deadpool 2, but I think it'll be PG-13.
Reactions: Noodles

D2 was a major disappointment.
I just hope they step up their game and get back where they belong.

vexred said:
That's an old article. I hope Deadpool is R rated and better than Deadpool 2, but I think it'll be PG-13.
Click to expand...

I'm expecting the same tbh. I mean... it's Disney we're talking about. Would obviously love to be proven wrong though!

During an interview with Collider, the Marvel head made it very clear that Deadpool 3 will be rated R, and set firmly within the shared world of the MCU.

“It will be rated R and we are working on a script right now, and Ryan’s overseeing a script right now… It will not be [filming] this year. Ryan is a very busy, very successful actor. We’ve got a number of things we’ve already announced that we now have to make, but it’s exciting for it to have begun. Again, a very different type of character in the MCU, and Ryan is a force of nature, which is just awesome to see him bring that character to life.”
Click to expand...