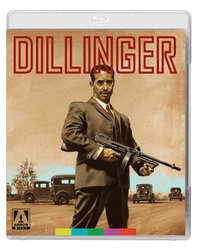 The runaway success of Bonnie and Clyde in 1967 proved massively influential: it made stars of Faye Dunaway and Warren Beatty, introduced a new form of violence to the movies, and inspired a stream of imitators, including Bloody Mama, Martin Scorsese’s Boxcar Bertha and the directorial debut of John Milius, Dillinger.

Milius presents John Dillinger as an almost mythical figure, tracing the rise and fall of the Depression era’s Public Enemy Number One as he takes on the banks and the G-men, led by the infamous Melvin Purvis.

Starring Sam Peckinpah favourites Warren Oates and Ben Johnson as Dillinger and Purvis, and with a supporting cast including Harry Dean Stanton, Richard Dreyfuss and Michelle Phillips of The Mamas and the Papas, Dillinger is a top drawer gangster picture: explosive, stylish and hugely entertaining.