We have some more info about another title we announced at Comic Con back in July. Hammer Films' classic vampire tale – starring the legendary Christopher Lee -- is planned for a Collector’s Edition Blu-ray release before the holidays! Some more detail as follows:

• Official street date is December 18th for U.S. and Canada territories (Region A)

• Release will come with a slipcover (guaranteed for three months after its original release date)
• The newly-commissioned artwork pictured comes to us from artist Mark Maddox. This art will be front-facing and the reverse side of the wrap will showcase the original theatrical poster art design.
• Extras are still underway and will be announced later in Nov. We are reconfirming today though that we have an all-new High-Def transfer in the works.
Once again National release date is planned for 12/18/18. However, if you pre-order now for early shipping directly from us @ https://www.shoutfactory.com/…/dracula-prince-of-darkness-c… you will also receive an 18' x 24" rolled poster of the newly-commissioned art. Only 500 of them are being produced. 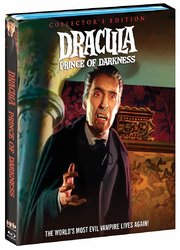