PureArts introduces the latest figure in their 1/6 scale articulated collection, the last Dragonborn from Bethesda’s Elder Scrolls V: Skyrim. Prophesied upon Alduin's Wall, and brought to life by PureArts Studio in a Collector Edition or Deluxe Version, the articulated figure wears detailed armor with faux-fur trim and removable horned helmet. Attack spells, interchangeable hands, and a figure display base are also included.

The Deluxe Version is limited to a run of 1,500 pieces, and includes a rack of weapons to arm the Dragonborn as he fulfills his ultimate destiny. 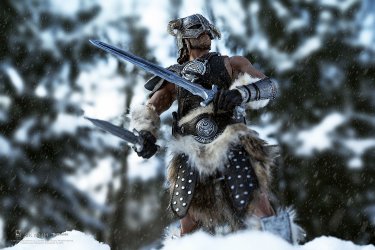