Dundee: The Son Of A Legend Returns Home - In theaters... Never

[CONTAINER][MOVIE1]Title: Dundee: The Son of a Legend Returns Home ()

Plot: Crocodile Dundee is back. Well, actually, he's missing in the Outback. And the only person who might be able to find him is the loudmouthed American son no-one knew he had. Introducing Danny McBride as Brian Dundee. This son of a legend is forced to channel his Aussie roots as he embarks on the ultimate adventure in the land down under. It's time to live up to the family name.[/MOVIE1][POSTER1] 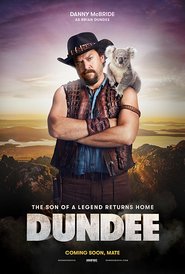 Ah crap... LOVED the 2 originals with Paul Hogan (must have seen those 20 times each when I was a kid...) and now they have to ruin this and mock all this???? Ah crap....
Reactions: DADDYCOOL187

should have done a serious one with chris hemsworth first and if it bombed then do a farce one with mcbride like 4 years later.

I agree. Chris should have been the son but they should have made him like his dad. THAT would have worked.
Reactions: DADDYCOOL187

Wow. they got me.

“Industry sources have indicated the teaser – featuring US actor Danny McBride – is part of an advertising campaign for Tourism Australia, set to air during next month’s NFL Super Bowl.”

So this is completely fake.
Reactions: DADDYCOOL187 and Drum18

kaw said:
Wow. they got me.

“Industry sources have indicated the teaser – featuring US actor Danny McBride – is part of an advertising campaign for Tourism Australia, set to air during next month’s NFL Super Bowl.”

I genuinely hope that this was actually a movie- and that when everyone came out and unilaterally hated every promo that was released, the studio backed up and went-
"A- a- haha- Right, it's TOTALLY a joke, guys. TOTALLY. We wouldn't actually spend $150 Million Rebooting Dundee... quick, just make something up- say it was a joke or something".

That being said- what does it currently say about our entertainment paradigm that we believed that this could be an actual film?

I'm all for a reboot / continuation so long as they do it right. A parody is just stupid.
Show hidden low quality content

Horror-Theatrical The Autopsy of Jane Doe - In theaters December 21st, 2016